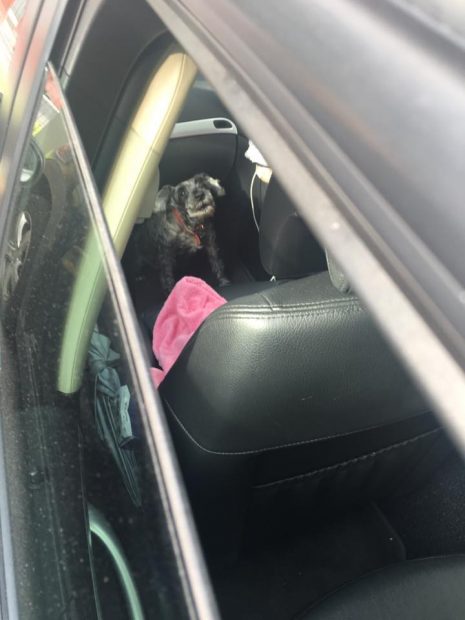 Facebook user Muk Weng Sang Roy shared in his Facebook on Friday (19 Aug) that he found a dog in a parked vehicle in an open car park on a hot and humid day. He said that the car driver had left the dog in the car for at least 20 minutes. As the back door was unlocked, the user opened it for the sake of the dog. But when the car driver got back she got upset with the user for doing so.  Roy said that he was sharing the videos and pictures of the incident as he was still upset about it.


Just in case you can’t see what he posted, this is what Roy said:

—
I’m sharing what I encountered at my work place car park and I hope people and friends will circulate this around too. For the sake of the dog who could have died from the heat.

Let me remind you this was an open car park and it was hot and humid. And there were 2 posts at the open car park entrance. There is a security guard and 2 building staff one of the post have AC inside.

I saw a dog inside the car, AC wasn’t on. I understand that you can’t leave your car engine on and unattended due to laws, but like I mentioned earlier, you could carry ur dog, or leave them with the security or building staff right? the back door was unlocked and I wasn’t really sure what I should do, get the dog out? Or just open the door to let in more air, I decided to just leave the door open(since the back door was unlocked) as my colleagues Advised me the owner may try to threaten me for attempting to steal his/her property, so I need to be careful and I decided this was the safest way. I also called and reported to the police.

So I waited together with 2 of the building staffs for the owner to be back, took about 20 minutes and she appeared looking grumpy as hell. The first thing she said was “did u open my car?” Followed by asking for my IC and phone number, which I gave. I mean I know I didn’t do anything seriously wrong anyway, I was just damn mad that the dog was left in the car. Owner claimed she did the right thing, totally unapologetic of her irresponsible actions. Owner was a middle aged lady by the way. Unfortunately due to me exchanging words with her I got carried away and didn’t take a photo of her. She wants to press charges against me if there was anything missing in her car, like yeah her stuff is way more important than her dog yeah?? What an ass.

She quickly left the scene. Still damn pissed about what she did. I attached video and picture. Please share this. She shouldn’t get away from this shit.