Who “sent trouble to” FactWire? 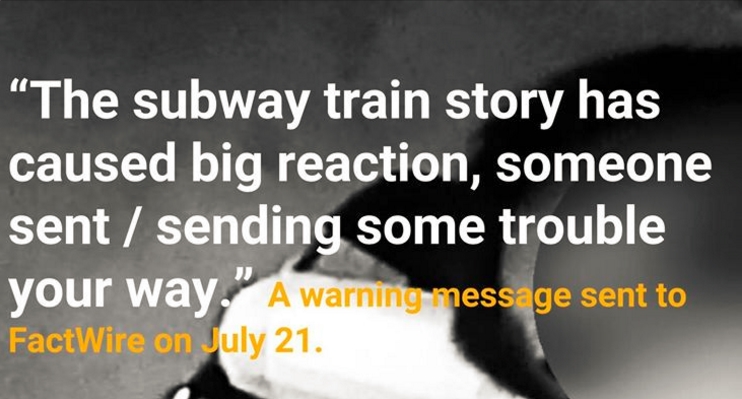 The following is a media release from Factwire.

—
On 21 July, FactWire received an anonymous message warning that someone would create troubles against the agency because of FactWire’s investigative report on the secret recall of defective Chinese-made train carriages from the Singapore Mass Rapid Transit (“SMRT”). “The subway train story has caused a big reaction, someone sent/ sending some trouble your way”.

FactWire reacted immediately by reminding its reporters to exercise vigilance for personal safety. Meanwhile, FactWire has stepped up security of the premises and the protection of all journalistic information under its custody. But the case has sounded the alarm about the risks faced by FactWire’s investigation team.

The investigation into the recall of defective SMRT trains involved the various public organisations and government departments of Singapore, China, and Hong Kong. FactWire does not speculate on the identity of the party behind the people causing the harassment.

To protect reporters and the investigative dossiers, FactWire has recently strengthened security measures. For these reasons, the normal reporting and editorial routines have been hampered. Attentive readers have been aware of FactWire recent reticence, and some have left comments in its Facebook page expressing their concerns. FactWire would like to express its appreciation for readers’ concerns and care. FactWire still stands.

But the extra precautions we have exercised has invariably strained our already very stringent budget.

FactWire took on the investigation of the defective SMRT trains for one sole purpose: the incident is of serious public interest and concerns many Hong Kong people. The investigation is relevant to Hong Kong people because MTRC, of which the HKSAR Government holds a majority stake, has been buying many trains and component parts from the same mainland Chinese manufacturers that produced the cracked SMRT train carriages. FactWire has made its best efforts in finding out the truth. The report has been published in major media in Singapore, Japan, South Korea, UK, US as well as Hong Kong.

Since the release of the investigation, the Singaporean government has confirmed the accuracy of the report. Local authorities and MTRC have also acknowledged and responded. The absence of any official denial on the details covered strengthens credibility to the authenticity of FactWire’s investigation.

FactWire’s operating expenses are always met by the public. All resources are completely used to serve readers. The sole mission of FactWire’s reporters is to reveal the truth behind major incidents where public interests are at stake. FactWire will never allow commercial or political considerations to influence its professional journalistic judgment.

This incident has given FactWire valuable experience as it allows the agency to review critically the personal safety of its editorial and reporting teams. More importantly, it reminds all FactWire’s editorial and reporting personnel to abide strictly by the principles of maintaining independence, fairness, and justice in its practices, and that every investigative report published by the news agency must be founded on impregnable evidence. Only with this can FactWire secure public support in any crisis and challenges, and can respond to any criticism with a clean conscience.

In the face of possible reprisal, FactWire will maintain its stand: its investigation reports are not meant to target any particular party. We have a duty to the truth.Follow us on Social Media