The Independent Singapore News
Home News SG Economy Who eats durians with a fork? Only PMs Lee and Najib

Who eats durians with a fork? Only PMs Lee and Najib 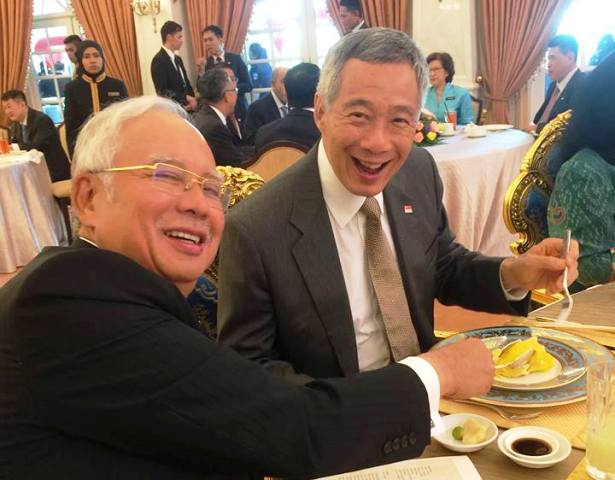 Prime Minister Lee Hsien Loong was with his wife, Ho Ching, in Malaysia yesterday (19 Jul) to witness the signing of the Memorandum of Understanding (MoU) with his Malaysian counterpart for the High Speed Rail (HSR). HSR’s 350km rail would reduce travel time between the two countries to just 90 minutes, with speeds of over 300km/hr. Singapore’s terminus of HSR will be situated at Jurong East.

PM Lee commented about the signing in his Facebook and said that “the High-Speed Rail (HSR) is a massive, long-term investment. Good execution will be crucial.”

The Prime Minister also shared several pictures with his Facebook. One picture in particular, taken by his wife Ho Ching, has amused people.

PM Lee captioned the picture: “PM Najib offering me more durian at lunch. How could I say no? :)”

The picture which was shared in TODAY’s Facebook drew similar comments.

Facebook user Meyer Tan commenting on TODAY’s Facebook said: “Not realistic at all. Firstly, no one eats durian with utensils. Secondly, no one, especially politicians wants to be seen associated with someone who is known world wide to be under investigation. Thirdly, for heaven sake, which air-condition restaurant would allow anyone to eat durian within air-conditioning confines lah, bro. Unless of course under duress or by self ownership of restaurant as you can imagine the cost of replacing the whole air-condition system after the event. Wayang to the max.”

Facebook user Ummu Nia however tried to explain that the use of utensils by the Prime Ministers was understandable: “Please lah people…. they are ‘working’… needs to shake how many hands during that time…LHL is a PM. It is certainly not nice to see him eating durian with hands and then durian smell stick to his hand. I dont see the issue to eat durian with fork. If at his own home… i dun think he even use a fork. Any singaporean knows to eat durian is use fingers. Please lah.”

Some netizens are also amused that Ho Ching, went to an official meeting in another country wearing sandals. Facebook user 黄建齊 felt that it was sloppy of her to do so.

This is the second durian controversy in days. The first was when Hougang MP Png Eng Huat complained about the unfair treatment his residents and him got at the Tuas checkpoint when they returned from a durian-eating trip.Follow us on Social Media