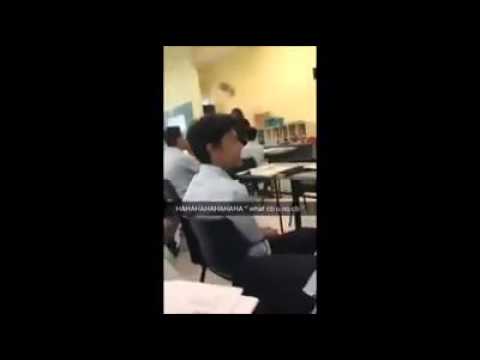 A video clip of a secondary school teacher using vulgarity on a student has gone viral. Youtube user Popo AsphyxiatesPanda who first shared the video, also released screenshots of a whatsapp conversation he had with the student which explained what happened prior to the incident.

According to the student, the incident happened after the student insisted on doing an assignment from the back page when the teacher had asked her to do it from the front page. The teacher than allegedly tore up the assignment and made little of her.

This was when the student used a vulgarity on her. The vulgar word means vagina in the Chinese dialect Hokkien. The teacher then asked the student if she did not have it.

The student at first asked the Youtube user not to circulate the video clip, saying that the school would reprimand her if he did. She also claimed that the teacher was fired for her outburst.

She later admitted that the teacher was still teaching in the school and gave permission to the Youtube user to release the clip.

Netizens have since identified the school as Northbrooks Secondary School.