The Independent Singapore News
Home News The Online Citizen apologises unreservedly to PM Lee for posting that he... 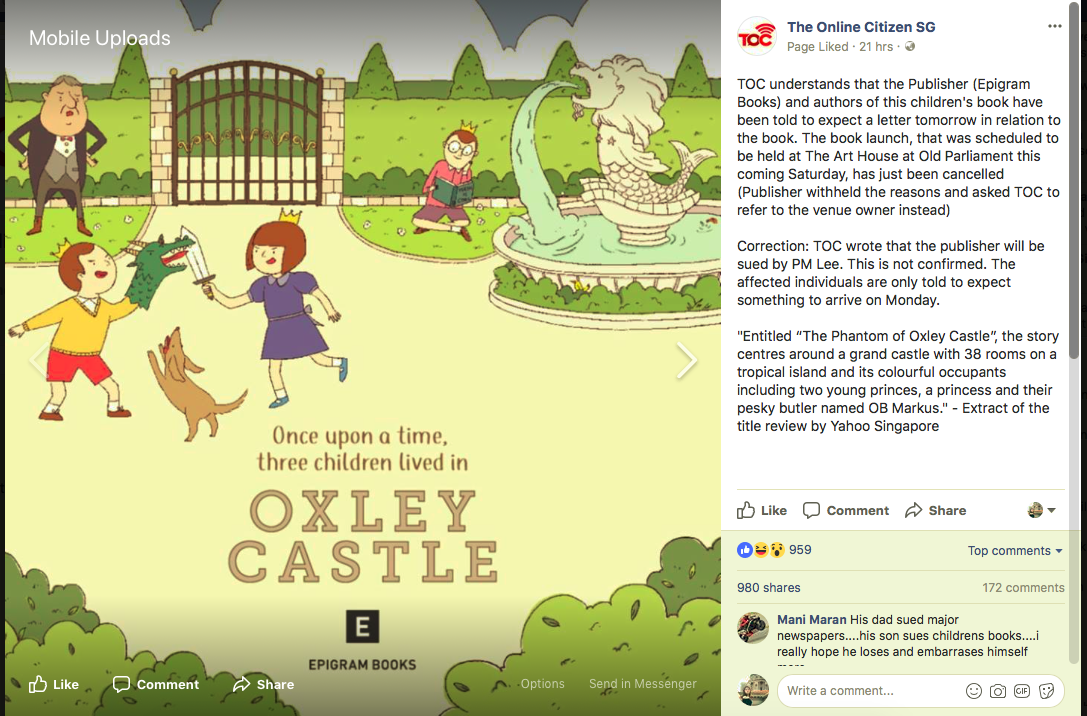 TOC had posted on Sunday that the official launch of the book had been cancelled and that the publisher of the book and the authors of the book, Chloe Tong and Liana Gurung, had been “notified that PM Lee will be suing them for defamation.”

It later corrected that it is “not confirmed” that the publisher, Epigram Books, will be sued by the PM.

Calling the publishers “affected individuals,” TOC claimed that the publishers were “told to expect something to arrive” today, indicating that the “something” would be a letter, possibly from PM Lee, his office or his lawyers.

“What we saw from TOC surprised us and it’s entirely not true. We’ve never received anything described like that.

“The reason why the launch is postponed is because we have another book being launched this Saturday and it’s planned ahead of launch of Oxley Castle. Due to the hype received, we decided not to launch Oxley Castle to overshadow the other book.”

Epigram Books subsequently disseminated a press release at 4.30pm, clarifying that they have “not received any letter of any kind” from the Prime Minister’s Office or any other individuals.

TOC later released an account of events on it’s website and revealed that it had received news of a possible defamation suit launch against the publisher “through a third party who had spoken to Mr Edmund Wee.”

Wee is the publisher and Chief Executive Officer of Epigram Books.

Despite Epigram Books’ claims that this is “entirely not true,” TOC still maintains that Wee personally confirmed that his company were told to expect something yesterday.

Besides apologising to the head of government for alleging that he plans to sue the children’s book publisher and authors, TOC maintained that their information and source was “accurate and credible” at the time the post had gone up:

“TOC apologises unreservedly to Mr Lee Hsien Loong for stating that he intended to sue the publishers and authors of the book for defamation.

“However, we stand by the fact that we were informed by the Publishers of possible legal action that would come their way today. Our information and source were deemed accurate and credible at the material time. The fact that the Publisher shared our original post on Facebook serves as evidence. We have and will produce further evidence if the need to do so arises.”

https://theindependent.sg.sg/book-publishers-refute-tocs-claim-that-pm-lee-might-sue-them-for-childrens-book-on-38-oxley-road/Follow us on Social Media