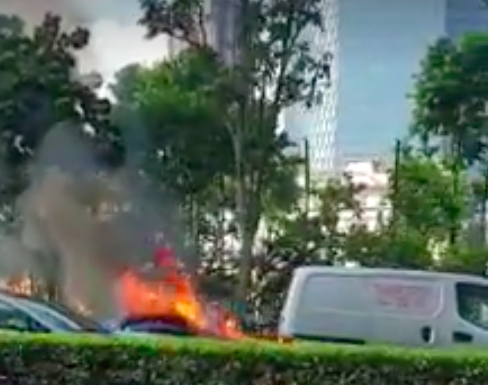 The Singapore Civil Defence Force was alerted to the fire at about 4:30pm, by which time smoke could be seen billowing out of the taxi.

The video of the blue ComfortDelGro taxi with its hood engulfed in flames went viral on social media.

An SCDF spokesperson told the media that, “The fire involving the engine compartment of a taxi was extinguished by SCDF using two water jets”.

In a report on CNA, the driver of the taxi, Mr Yeo, said, “White smoke started pouring out of the exhaust when I was driving, and I parked at the side of the road before the front of the car started emitting black smoke. I quickly left the car with my things as the smoke increased,” he said.

According to Mr Yeo, the fire burned for about ten minutes before it was finally extinguished.

Comfort DelGro’s group chief corporate communications officer Tammy Tan told the media, “We are thankful that our cabby has escaped unhurt. We will assist him the best we can”.