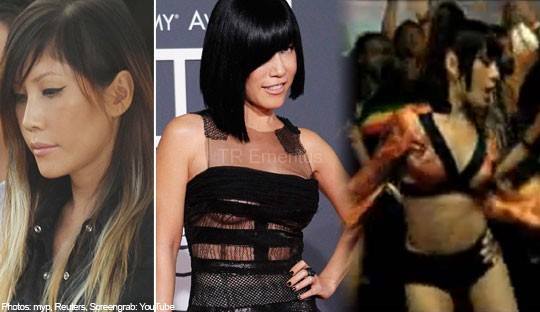 During her heyday when Sun Ho, aka wife of convicted Pastor Kong Hee, was singing and exposing herself, she gave an interview to The New Paper in 2004 (‘Will Sun shine as love guru?’, 24 Jan 2004).

In that interview, she boasted she had 42 boyfriends. She said she had her first crush at 9 years old (before puberty). By 16, she disclosed that she already had 42 boyfriends, which means on average, she would have 6 boyfriends a year or one every 2 months.

She said that at one time, she even dated 3 guys at the same time. She was moving from boyfriend to boyfriend because she was “searching for true love”, she said.

Her interview also revealed that at a very young age, she is already a very aggressive person, actively seeking out for male companionship.

Recalling her first crush, she said she liked the boy so much that she took the same bus as he did to tail him. She even asked her sister to pen a love letter for the boy.

Her frequent changing of boyfriends within a short time period each, also shows that she has no remorse in dumping any boyfriends once she finds them no longer “exciting”.

She told TNP that she suffered depression during her younger years because she was “very insecure” and “very selfish”. She would hold on “too tightly to too many things”. In other words, she revealed that she was a very possessive woman.

She admitted that in her quest for love, she had hurt people.

Eventually at age 17, she met Kong Hee in church. Kong was a charismatic youth leader at the Assemblies of God church then.