ST fails to highlight PAP's small-mindedness in the NCMP saga 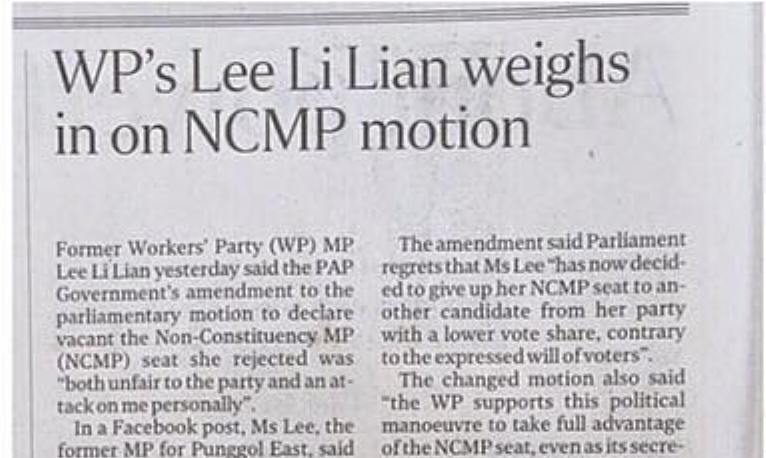 The Straits Times (ST) today reported on former Punggol East single member constituency Member of Parliament (MP), Ms Lee Lilian’s Facebook post where she had rebutted current People’s Action Party (PAP) MP Charles Chong who suggested that Ms Lee should have respected the ‘decision of the minority’ who voted for her, by taking up the NCMP seat.
ST however failed to report a key point in the ex-MP’s post about why it is extremely challenging for opposition party candidates to serve in constituencies where the minority had voted for them.
ST reported the former MP recounting how a People’s Action Party (PAP) held town council had rejected her application to hold a community event recently. But not that Ms Lee saying that the PAP run town council’s decision is rather ironic because she never never rejected any applications from PAP-affiliates to hold events at areas managed by the WP Town Council when she was in charge of that constituency.
In the note she further stressed that during her term as an MP, she was never successful in her applications to hold events at areas managed by the Housing & Development Board like Rivervale Plaza.Follow us on Social Media