So precious to catch a glimpse of Ronaldo’s Singapore stopover 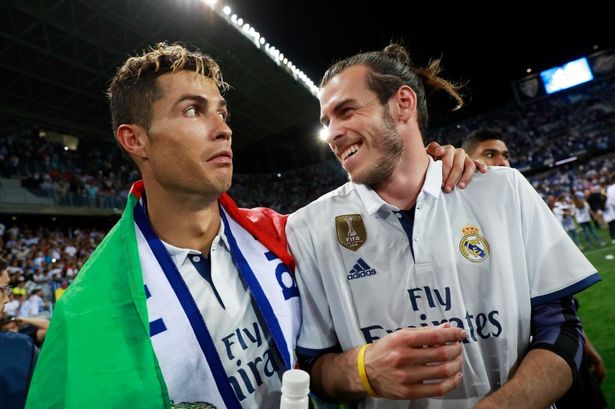 LIKE his famed repute as a lightning-like football striker, Cristiano Ronaldo zipped in and out of Singapore over 24 hours on Friday, leaving scores of fans and the media running in circles.

He had no official public engagements except to privately sign an endorsement deal as well as meet with Singapore “towkay” Peter Lim, owner of Mint Media, and a personal Ronaldo friend.

Mystery surrounded his Singapore arrival although Ronaldo tweeted a picture of himself on the tarmac at an undisclosed location, in front of a Gulfstream G550 private jet owned by sports giant Nike.

One of his representatives, Luis Correia, nephew of Ronaldo’s agent Jorge Mendes, arrived at Changi Airport on Thursday afternoon from Frankfurt, but declined to talk to the media.

It was about four years ago when the three-time Ballon d’Or winner’s last visit to Singapore in 2013, where he made a cameo appearance at Crest Secondary School as an ambassador for the Singapore Olympic Foundation-Peter Lim scholarship.

But even over 24 hours, the Portugal captain and Real Madrid mega-star Ronaldo was surrounded by a flock of heavyweight bodyguards from the airport to hotel and even to Thomson Medical Centre (TMC), where he visited the new-born babe of billionaire Lim’s 24-year-old daughter Kim Lian.

The younger Lim was recuperating at the medical facility after giving birth three days ago. No mention was made to who the father was, as much as journalists discreetly enquired from hospital sources and family friends.

Security staff quickly got to action when Ronaldo, clad in sportswear, a blue cap, shades and ear phones hanging off his neck, walked briskly into the hospital building, after arriving in an unmarked van, with the footballer’s image emblazoned at the side.

Reckon the media were taken for a real ride as they were told to gather at the main lift lobby, where the mega-star and his entourage went up, for a possible interview session.

But the anti-climax came when they were told about 15 minutes later that the group had left by another exit!

Socialite Kim Lim, who is in her 20s, was delighted by the quicky VIP visit from Ronaldo and hinted that wedding bells will be in March next year. She posted a video showing a wedding invitation with the words: “Save the date, 23rd March 2018”.

It is unlikely any local or foreign media will ever get a door-stop interview, let alone a formal press conference, as Ronaldo wants to keep his Singapore stopover as discreet as possible.

It is understood, that in addition to signing the deal, Ronaldo will have a private dinner with Lim before flying out to China for further Mint Media events.

Lim, who owns Spanish La Liga club Valencia and who has 187,000 followers on Instagram, has also kept her marriage a secret on social media. And he was pleased that Ronaldo came to “football bless” the new-born baby.

Forbes has estimated that Ronaldo, one of the most marketable athletes in the world and has endorsements with major brands like Nike, Emporio Armani, Tag Heuer and Herbalife. He reportedly earns US$27million annually from endorsements from a variety of global endorsements.

Apart from Ronaldo, Mint Media also manages the image rights of celebrity dog-trainer Cesar Millan, who was in town last month. The company also handles the endorsements of the Class of 92 – the quintet of former Manchester United players Ryan Giggs, Nicky Butt, Paul Scholes and brothers Gary and Phil Neville.

Schoolteacher Geraldine Chan, 23, from Bukit Batok, who followed Ronaldo from his Manchester United era, was disappointed at the extremely secretive Singapore visit. She says: “I found out about Ronaldo’s arrival through The Straits Times’ Facebook post.

“I have been crazily following Ronaldo since his Manchester United days and I had been waiting here since 9am. Although he didn’t sign my jersey, it was still an unbelievable experience to see him in person for the first time.”

Ronaldo’s reclusive stance is understandable. It has not been happy days the past fortnight as his future at the Bernabeu has been in doubt since the end of last season. He was reported to be “deeply unhappy” after coming under investigation for tax fraud in Spain.

Real Madrid officials say he is on an extended pre-season break, following his recent exertions at the Confederations Cup in Russia, where Portugal finished third.

He was recently seen holidaying with his pregnant girlfriend Georgina Rodriguez in Ibiza, and will not feature for Real at the International Champions Cup in the US, after his name was omitted by the Los Blancos from the travelling squad.

For Singaporeans, the 1,440 minutes stopover was just too zippy to savour the football icon, who won everything with Manchester United before completing a world record £80million transfer to Real Madrid in 2009.

And you can bet your last dollar that, wherever he goes, from Brazil to Bhutan, Sweden to Swaziland or Australia to Austria, where he’ll always be in highest demands, he’s likely to leave hundreds of fans and the media running in circles.Follow us on Social Media