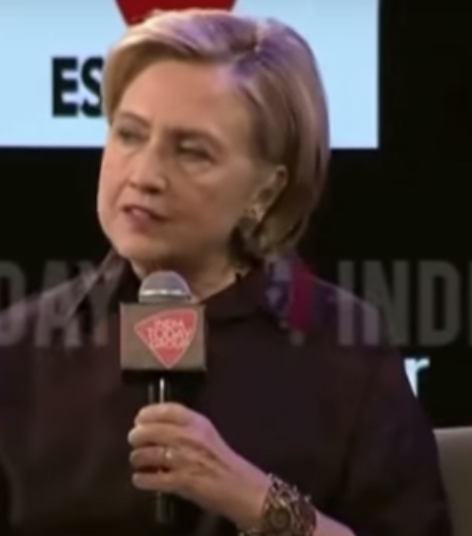 Neil Buchanan, who writes for Newsweek, laments Hillary Clinton’s lose-lose, damned if she does, damned if she doesn’t situation, saying her haters have won over her. He believes that actually lying low will cause her to help the Democrats win the next elections.

It seems that it has reached the point that no matter what Hillary Rodham Clinton says, or even if she says anything at all, there are certain people who will view her remarks with a negative lens, and respond with criticism. Her remarks may even make situations worse. This is not just true about supporters of President Trump, whom she ran against in the last Presidential elections, but about other, more objective people as well.

In a recent speech in India, Mrs. Clinton talked about why she lost the US elections in 2016. While people from wealthier states supported her, another demographic of older white voters from economically struggling states embraced Mr. Trump’s slogan to “Make America Great Again” and voted for him.

These remarks were criticized not only by those regularly bash Mrs. Clinton, but , as Mr. Buchanan wrote, also by two writers from the Washington Post, Aaron Blake and Kathleen Parker, neither of whom are Trump supporters.

Mr. Blake took issue with Mrs. Clinton’s remarks, when he wrote, “It’s difficult not to read Clinton’s comments as an argument that her votes were more valuable—or at least more productive—than were Trump’s.”  It makes no sense for the writer to twist the remarks to mean that Mrs. Clinton’s votes were more valuable just because wealthier people voted for her, instead of understanding that what she meant was that people who are in economic straits are more likely to elect a man with extremist views, such as Donald Trump.

Mrs. Clinton had said, “And his whole campaign—’Make America Great Again’—was looking backward. You know, you didn’t like black people getting rights; you don’t like women, you know, getting jobs; you don’t want to, you know, see that Indian American succeeding more than you are—you know, whatever your problem is, I’m gonna solve it.”

She was pointing out that certain ones of Trump voters longed for times past. But Aaron Blake, however, took her point quite far, alleging that Mrs. Clinton was saying that Trump voters “didn’t even want black people to have civil rights or women to work outside the home. Whatever you think of the modern-day GOP, there simply aren’t a whole lot of Republicans arguing black people shouldn’t have rights—or even telling pollsters this privately. Yet this is the picture Clinton painted of Trump’s support.”

Kathleen Parker, an op-ed columnist for the Washington Post took on a sarcastic tone in her column about Mrs. Clinton’s speech, with remarks such as “Hillary Clinton just can’t quit herself,” and talking about how she won in all the “smart, cool places.” Ms. Parker called Mrs. Clinton out for what to her was derision for those who did not support her, and her piece ended with, “By her insinuations, she has demonstrated a loathsome prejudice against the poorly educated and unemployed, as well as rural whites, social conservatives and women who stay home with their children—to name a few.”

Ms. Parker even went as far as calling the fact that Mrs. Clinton mentioned Indian-Americans as “a pandering low,” instead of her merely acknowledging that she was, after all, in India. She also wrote, ”So, the people who voted for Trump resent Indian Americans’ success? Funny, because surely her audience was aware that the president selected Indian American Nikki Haley to be the U.S. ambassador to the United Nations.”

Mrs. Clinton is roundly criticized whatever she says and even when she holds her tongue. Almost everyone in the Democratic Party no longer wants to answer questions about her comments, since many times the comments presented to them are already spun unfavorably.

Mr. Buchanan believes that the best thing for her to do is “simply to stop talking.” While she will still be called out for failing to respond to a situation, in these cases she’s the only one who receives blowback, instead of others in her party who are also affected whenever she opens her mouth.

The Democratic Party has a good track record for making losing candidates vanish, as in the case of Al Gore and John Kerry, who should have won, or Walter Mondale, who ran for President versus the incumbent during a time when the US economy was flourishing, or Michael Dukakis, who had run his campaign poorly, Mr. Buchanan points out. Perhaps the party will have better chances with both Clintons holding their peace, since the #MeToo movement has cast a suspicious light on Bill Clinton as well.

Mr. Buchanan writes with compassion for Mrs. Clinton, who at age 70 is still fill of vitality and has stayed sharp and astute. He points out that there are many issues she cares passionately about, and how disappointing it must be to keep out of politics. But he asks, “How can she affect policy without being the anti-Midas touch to Democrats, who mostly agree with her policy positions but understandably have to distance themselves from her?”

He points out the irony of Mrs. Clinton needing to practice more discretion at this point in her life and career, after she has been told for many years that she is too secretive, even “cagey”. But there is still much good that she can do if she quietly lends her support to good causes behind the scenes.

Mrs. Clinton, he writes, should also stay on topic when she does speak, “In other words, even when she is not in campaign mode, she needs to re-learn the art of message discipline,” which she should not find to be too difficult, as she has proven that she does not take bait easily.

Mr. Buchanan ends his piece quite bluntly, “Because she has been turned into a she-demon even by people outside of Republican campaign rallies, Hillary Clinton must disappear from the radar screen if she wants to help her side win the coming political battles.  That does not mean that she has to play golf or retire to Florida, but her policy work has to be its own reward.  Even though I have often criticized her (for every good reasons), I realize that this is unfair.  And I know that she is up to the task.”