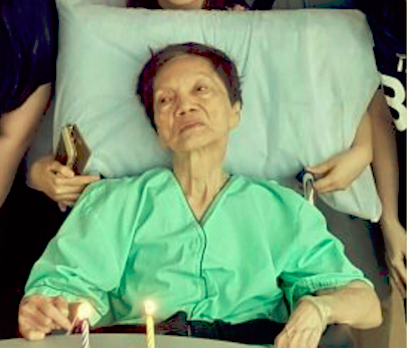 A 77-year-old cancer patient is desperately holding on to her life, yearning to have one last glimpse of her son who has separated from her for more than ten years, before she passes on.

Mdm Wang Heng Fong was admitted to Singapore General Hospital (SGH) two months ago, as she was experiencing a sharp pang at her abdomen. She was then diagnosed with terminal colorectal cancer – doctors have since predicted that she may not survive to see the new year.

Mdm Wang’s only daughter, Ms Joey Heng Joo En, 39, has since approached The Independent to help her mother connect with her long lost son, Mr Wang Jia Min (王家民), perhaps through our readers who may know him.

Mdm Wang was raised by her godmother during the World War II. Feeling grateful for their upbringing, Mdm Wang passed custody of her son Wang Jia Min, to her godmother who did not have a son. The adoption was only known to Wang Jia Min’s biological and adopted parents and was kept from Mr Wang Jia Min over the years.

Ms Heng said that her parents and their two eldest sons lived with Wang Jia Min and his adopted parents at the 2nd storey of Block 195 at Kim Keat Avenue after the adoption. Ms Heng said that her brother’s adopted parents – Uncle Wang (王大叔) and Aunty Wang (王大嫂) – moved out from the home later, at which point both families lost touch when the Wang family changed addresses and contact information.

Ms Heng says that her brother, Wang Jia Min, must be in his mid-40s today. She added that he used to be close with his biological mother when they lived together.

According to the family, bed-ridden Mdm Wang began expressing her desire to see her son, from about a month ago. Her family indicated that she longed, “It’s been long since I last saw Jia Min. I miss him…” repeatedly over the past month.

As Mdm Wang’s condition deteriorates day by day, Ms Heng and her siblings decided to reveal the secret. Ms Heng published a post on her Facebook to look for Mr Wang Jia Min, and also wrote to The Independent and Lianhe Wanbao for help.

Ms Heng also said that a few days back, Mdm Wang’s doctor informed that her cancer cells have spread massively, causing multiple severe impairments of various parts of Mdm Wang’s body, resulting in a brain stroke and heart attack. The doctor has told the family to be prepared for the worst at all times.

Mdm Wang – whose partner passed away over ten years ago – is currently unable to perform basic tasks such as talking and moving. She has lost her vision as well.

“We sincerely hope Jiamin can see our message soon and make it to the hospital. He can at least have one last meet while she can still hear sounds.”

Here are the photos provided by Ms Heng, with descriptions below each.