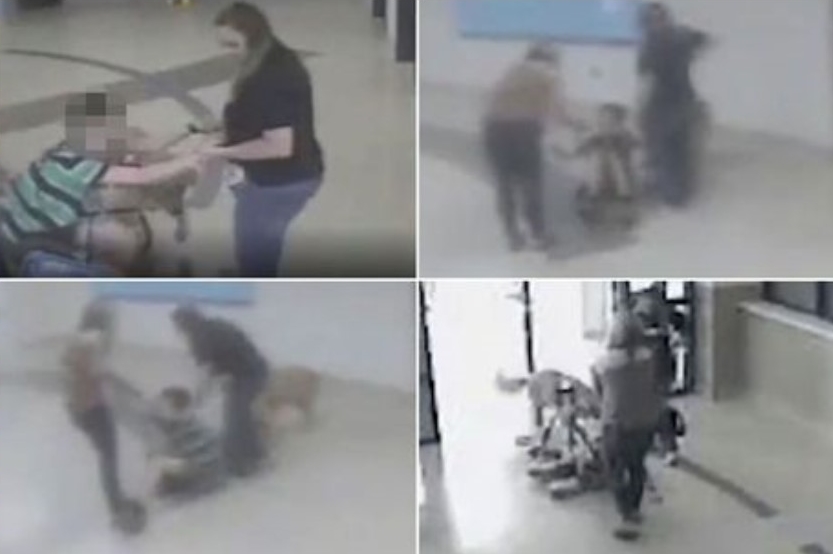 A teacher and a school nurse at Tates Creek Middle School in Lexington, Kentucky, US have been caught brutally dragging an autistic pupil and his guide dog across the school hall and up stairs, leaving the disabled child covered in bruises.

11-year-old Thatcher Grayson’s mother Jo was alerted to the abuse after she was sent a text by the teacher, who wrote: “The nurse and I had to physically help him get up off the gym floor. He wouldn’t move and other kids were trying to play. I apologise if he has marks on him.”

At first, Mrs Grayson did not realise the seriousness of the situation and thanked the teacher for informing her. It was only when Thatcher returned home and undressed for bed that Mrs Grayson noticed how severely her son had been injured.

Speaking to CNN reporters, Mrs Grayson said: “We were getting ready for bed, and when I pulled his shirt off, I saw cuts and bruises on his body. That didn’t look like marks of someone helping him get up.”

Since Thatcher is non-verbal, Mrs Grayson demanded to see the CCTV footage and discovered what had really happened when she went to the school the next morning:

In the video, Thatcher can be seen being dragged across the hallway and up some stairs by the school nurse and teacher, before being pulled into another communal space. His service dog is by his side and is dragged along with the boy.

Mrs Grayson told told ABC news: “I don’t understand how anybody could do that to any child, regardless of whether or not they have a disability. I was initially told that he was having a meltdown, but the truth is, he wasn’t having a meltdown.”

Mrs Grayson filed a report with the district attorney after reviewing the footage. Although no arrests have been made as of yet, the teacher has reportedly been dismissed and the school nurse has been placed on leave as investigations are ongoing. Lisa Deffendall, a spokeswoman for the school district, said in a press statement:

“There is absolutely no tolerance for the conduct of the employee in this incident, and while we cannot discuss specifics, we do want to reassure our families that we take any situations of this nature very seriously.

“Our training is very explicit that physical restraint is a last resort only to be used when a student is a danger to themselves or others. The training also shows employees the proper ways to hold or transport students. In this case, neither of those standards were met.”

Thatcher has, in the meantime, returned to the school after the teacher was sacked.Follow us on Social Media