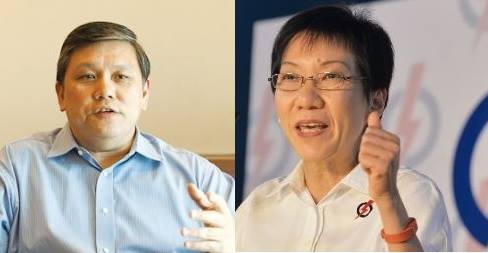 Retired Permanent Secretary Benny Lim who started his career in the police force recently gave an interview to magazine “Urban Solutions”, which was also published on ST today (18 Jan).

In the interview, he was asked for his views on immigration issue in Singapore. “A Singaporeans’ concerns over foreigners arose when they perceived unfair treatment,” he said.

“I believe we can do more in the integration of new citizens. We ought to give more thought to our engagement programmes, or even evaluate how integrated a person has become in our society, as a consideration for citizenship.

In other words, the Singapore citizenship should be given to a FT (foreign talent) only after considering how the person has already integrated into our Singapore society. Going by this criteria, certainly ex-PRC table tennis players from STTA like Li Jiawei and Feng Tianwei would not qualify since they can’t even speak a word of Singlish, let alone proper English.

Mr Lim also added, “We may want to consider a term permanent residency (PR) system where those who choose not to be citizens when eligible can be reverted to employment pass. In this case, they can continue to live and work here but with no right of permanent stay, and can leave when they retire or stop working.”

“This is a tweak and formalises the current roundabout regime of the fixed-term Re-Entry Permit. It calls a spade a spade and makes PR a commitment towards citizenship,” he said.

Mr Lim’s suggestion makes a lot of sense. Many FTs want to work in Singapore but do not want to commit to Singapore permanently. They only want to get PR status because it’s easier for them to switch jobs. If they are on work pass, they will have to leave Singapore once it is terminated. Many have no intention to become citizens at all.

Hence, Mr Lim is taking a very objective approach in engaging FTs here in Singapore. For those who swear their allegiance and commit themselves to Singapore wholeheartedly, the country will reciprocate. But if they are here just for economic gains, they would also be treated as temporary visitors or workers. We don’t necessary have to call them “talents” so as to stroke their “egos” further, making them think that without them, Singapore would fail.

In contrast, Ms Fu likes to treat all foreigners working here like gems. In 2010, she was rapped by netizens for spending taxpayers’ monies to organize a controversial ‘Water Splashing Festival’ for foreigners in Bukit Batok to celebrate their New Year. The participants were even given free water-guns and a tank of water to “shoot” at one another. They were also treated to a Myanmar Live Band Performance as well as songs and dances.

Ms Fu who turned up in a Burmese longyi (sarong) gamely sang a Burmese song on stage to the delights of the foreigners. The foreigners were having so much fun that they even sprinkled “bits of water” on Ms Fu: http://www.bukitbatok.sg/node/62

The event sparked a controversy in cyberspace with some netizens questioning why taxpayers’ monies was spent on organizing festivals for foreigners. In response, Ms Fu said that the event is a way for Singaporeans to show our “respect” to foreigners and even asked us to “celebrate” their festival together with them!

Why didn’t Ms Fu ask the Burmese to celebrate our Chinese New Year or Hari Raya with us instead?

—
Republished from the Facebook page ‘We want Minister Grace Fu to resign‘.