The Progress Singapore Party has responded to the Government’s rebuttal of a statement the opposition party had issued last week explaining its position on the Protection from Online Falsehoods and Manipulation Act (POFMA).

POFMA is an anti-fake news law which provides the government with powers to act against online falsehoods to protect public interest. The law, which went into effect in October, gives ministers the authority to determine what is an online falsehood and whether to take action.

In its first statement on the issue of legislation to curtail fake news, the PSP said on 11 Dec that although the viral spread of fake news should be curbed it believes that the current form of the POFMA law falls short. Asserting that the courts should be the arbiters who decide what is a deliberate online falsehood, not ministers, the opposition party said:

“The Progress Singapore Party (PSP) is founded on the tenets of Transparency, Independence and Accountability. Measured against these values, the current form of Protection from Online Falsehoods and Manipulation Act (POFMA) falls short.

“Currently, POFMA empowers the Minister to declare a piece of news to be falsehood, without requiring any justification, criteria or standards. This does not measure up to the standards of Transparency and Accountability. And where the news involves the Government, it also fails the standard of Independence.

“Online falsehoods can arise from 3 scenarios: Important facts, statistics and data are not made readily available and accessible to the public and hence guesses were made based on limited information; Negligence or failure to exercise more care by the purveyors of news in fact-checking; and Deliberate falsehoods where the purveyor intentionally sets-out to mislead his/her audience.

“PSP agrees that the Government needs to be able to act speedily to curb the viral spread of fake news. For that, we support the need for Ministers to be empowered to demand news purveyors to post a link to a site where the Government can provide the facts to swiftly stop the spread of misinformation.

“However, to declare any news as falsehood and to impose any penalties thereof, PSP is of the view that it should be done by the Courts of Singapore for Independence. The Courts would also have an established system and precedence of determining falsehood from its handling of cases like fraud, thereby ensuring Transparency and Accountability.”

That same day, the Ministry of Law and the Ministry of Communications and Information issued a joint statement asserting that the PSP statement made “several untrue claims about POFMA.” The Government ministries said:

“PSP claims Ministers can use POFMA to “declare a piece of news to be falsehood, without any justification”. This is untrue. The law explicitly requires Ministers to state why the specified statements are false. There are precedents in law as to how falsehoods are to be determined. When POFMA was used recently, the reasons why the statements were false were explained clearly. Significantly, PSP and Mr Brad Bowyer do not deny that his post contained falsehoods.

“PSP goes on to assert that there are no “criteria or standards” for Ministers to use POFMA. Again, this is untrue. The law states that POFMA can only be used when clear criteria are met. And the process enables an aggrieved person to challenge the Minister’s direction in court within days, and at minimal cost. This sets a high standard of accountability.

“PSP says that Ministers can “impose any penalties” they wish. This too is untrue. Ministers can give directions, for example requiring a correction to be posted. But if the direction is not complied with, only the Courts can impose penalties, in accordance with due process and established legal principles.

“All this information is available online, and has received widespread media coverage. A person who posts a falsehood but subsequently posts a correction will face no penalties. If there is any criminal conduct, that has to be determined by the Courts, and penalties are again decided by the Courts.”

The Government also took issue with a graphic that accompanied the PSP statement on POFMA that showed individuals’ mouths being taped shut.

The PSP responded to the Government’s rebuttal in a Facebook comment published this afternoon (16 Dec). Asserting that its position is that “POFMA should be used as a last resort,” the opposition party pointed out “several inaccuracies” in the Government’s clarification:

“Part of our statement reads “Currently, POFMA empowers the Minister to declare a piece of news to be falsehood, without requiring any justification, criteria or standards.” In your clarification, you have split that sentence into 2 and said that:

“a. “PSP claims Ministers can use POFMA to “declare a piece of news to be falsehood, without any justification”. This is untrue. The law explicitly requires Ministers to state why the specified statements are false.”

“b. “PSP goes on to assert that there are no “criteria or standards” for Ministers to use POFMA. Again, this is untrue. The law states that POFMA can only be used when clear criteria are met.”

“Our statement refers to the determination of falsehood, not the use of POFMA. So part (b) is a misunderstanding. For part (a), we believe you are referring to Section 6(b) of POFMA regulations which states that the reasons for declaring falsehood must be listed in a Part 3 Direction or Part 4 Direction.

“We have listed justification, criteria and standards together because for a reason to be justified, there must be standards with which to measure it against. In the absence of objective criteria or standards, it becomes arbitrary. However, we accept your point that this could be arguable, and will accordingly remove the word “justification” from our revised statement.

“However, this does not change the fact that we lack clear and objective criteria and standards for the determination of falsehood.

“Section 2(2)(b) POFMA says that “a statement is false if it is false or misleading, whether wholly or in part, and whether on its own or in the context in which it appears.”. This definition is circular and does not add clarity.

“You have also cited as basis precedents in law as to how falsehoods are to be determined. As such, it would be logical for such determination to be done by the courts instead of the Minister. If not, it raises questions like (i) are legal precedents binding on the Ministers? (ii) do Ministers act on the advice of people with similar qualifications, training and experience as judges, so as to uphold the same standards?

Repeating its stance that the courts should be the arbiters of what is fake news, the party said:

“We do not claim that “Ministers can impose any penalties” nor is it our intention to imply such. Imposing penalties are the follow up actions after the determination of falsehood, and thus have been included purely for completeness.”

Responding to the Government’s complaint on the graphic that accompanied the PSP statement, the party added:

“In our statement, we have explicitly supported empowering the Minister to demand a link to a clarification statement. Therefore, it would not make sense for us to be implying through the graphics that requiring a factual statement to be posted in order to correct a false statement curtails free speech.”

The PSP explained that it wants to “move towards a kinder and more gracious society, not a more litigious one.” Asserting that “POFMA should be reserved for only those who repeatedly and deliberately perpetuate falsehoods,” the party said:

The party further clarified: “The gist of our stand is that empowering the Minister to ensure the link to a clarification should be sufficient for the purpose of swiftly stopping the spread of fake news.

“There is no necessity for the Minister to also determine a statement is false or done with ill intent, in a hurry. Having the courts determine falsehood is logical and in line with the existing practice before POFMA was enacted, and it ensures greater transparency, independence and accountability.”

It added: “We appreciate MCI reaching out to us via FB and for this dialogue to occur. It would be to the benefit of Singapore for all organisations not to adopt an adversarial approach, and instead reach for a better outcome via dialogues and debates.” 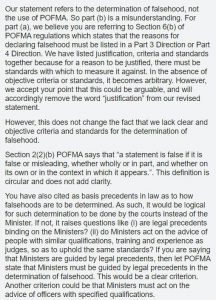 PSP says courts should be the arbiters of what is fake news, not ministers