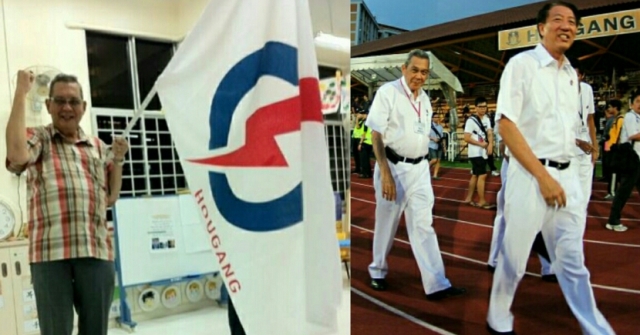 73-year-old People’s Action Party (PAP) Assistant Branch Secretary for Hougang, Lionel De Souza. said in Facebook that someone hacked into his Facebook account to post several defamatory and indecent posts. One of the posts was that of a naked child.
The former policeman claimed that the hacking was the work of a PAP supporter with the initials of ‘EW’.

When a Facebook user suggested that Lionel should report the hacking to police, Lionel said that he will “administer wild west justice”.

A woman by the name of Elizabeth Wong responded to Lionel and said that as a former police officer, he should know that hacking and posting of nude child photos are criminal offences and that he should make a police report. Elisabeth asked if Lionel needed her to go with him to the police station.
Elisabeth further claimed that Lionel became a PAP member because of her, and that misconduct by a PAP member will be investigated by the leadership of the political party.

Elisabeth said that her friend asked her to be more ‘charitable’ towards Lionel, and that if she had chosen to pursue the matter, he would have had to pay damages to her and also lose his PAP membership.

Elisabeth said that she has informed the secretary-general of the PAP, Lee Hsien Loong, about the misdeed of his Party member.
—
Source: http://bit.ly/1qILw9gFollow us on Social Media