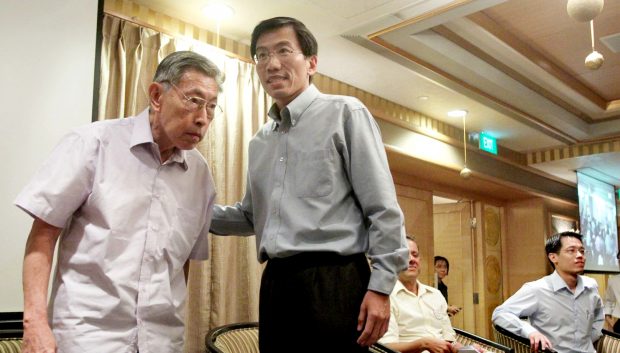 The Singapore Democratic Party has issued a statement to counter Mrs Lina Chiam’s note that both Mr Chiam See Tong and she were not endorsing anyone for the by-election in Bukit Batok single member constituency.
The statement was written by a long-time supporter of SDP, Dr Wong Wee Nam. Dr Wong is not in the leadership of the Party and he is also not a member of SDP. In the statement released on 23 Apr, Dr Wong said:

“The image that Mrs Lina Chiam is referring to is an article in an issue of The New Democrat published in June 2015 which I had written. It recounts my effort in 2010 to try bring Mr Chiam back to the SDP.
I did this because I believe that the opposition should show greater unity and I have always tried to work towards that end. In this case it was not to be although to the SDP’s credit, it was open to the idea. The SDP was not seeking any endorsement from Mr or Mrs Chiam.”
Although Dr Wong’s statement said that he was trying to reconcile the leaders of the two political leaders through his efforts in 2011, his write-up of the efforts paints Mr Chiam in a rather unflattering manner.
It said:
“At that meeting, we explored how we could help Mr Chiam leave a lasting legacy. With his problems with the SDA (Singapore Democratic Alliance), all of us acknowledged that the public perception of Mr Chiam as a one-man show needed to be addressed.”
The same article however, paid a glowing tribute to SDP which is led by Dr Chee Soon Juan.
“<…>the best organized and most resilient party at that moment was the SDP. They had a very dedicated and focused team, strong ideological backbone and intellectual muscle, and good resources.”
Dr Wong said that the newsletter was published in June 2015, but it did not clarify if SDP had circulated the newsletter during its outreach in Bukit Batok recently.