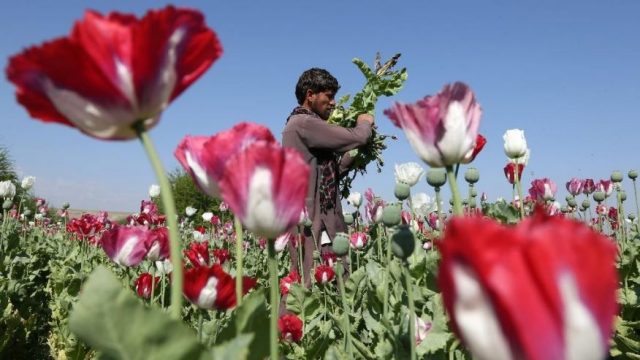 The UN Office on Drugs and Crime (UNODC) calculates that opium production has increased by 43% in 2016.

Opium production in Afghanistan has soared by 43% in the last one year, according to a new report commissioned by the United Nations (UN).

The UN Office on Drugs and Crime (UNODC) has said in the report that the place used to grow the poppy plant, the source of opium, has surged by 10% to 201,000 hectares. More than 4,800 tons of opium was produced in 2016, compared to 3,300 tons of the drug last year. Eradication measures, on the other hand, have fallen by 91%.

UNODC Executive Director Yury Fedotov said in a statement: The survey shows a worrying reversal in efforts to combat the persistent problem of illicit drugs and their impact on development, health and security.”

UN officials have cited better farming conditions, favourable weather, rising insecurity and a drop in international donor support as the reasons for the surge in cultivation, driven by a higher yield per hectare.

The report mentions that no eradication operations have been launched in provinces with high levels of opium poppy cultivation due to logistical and financial issues and poor security situation. The UN report stated that mean yield per hectare has reached 23.8 kilograms per hectare, 30% more than in 2015.

Afghanistan is the biggest cultivator of opium responsible for 80% of the world’s production. Although the cultivation of opium is unlawful in Afghanistan, it is still a vast cash crop for under developed farming communities and illegal opiates on the world market. Baz Muhammad Ahmadi, Afghanistan’s deputy minister for counter-narcotics, was quoted in an online article on The Guardian said: “I believe with the existing equipment, facilities and civilian taskforce, we cannot fight the cultivation of poppy in insecure areas.” “The challenges of deteriorating security in different parts of the country took away the opportunities to destroy poppy farms.”

Opium is the key source of drug that is processed chemically to produce hard drugs such as heroin. Opium is extracted from the poppy plant – a main crop cultivated and produced in Afghanistan.

The drug is also used to make some of the strongest medicinal painkillers such as morphine. While many countries cultivate opium for medicinal purposes, Afghanistan’s opium output is mainly for the illicit drug trade.

Despite the Afghan government’s policy to wipe out poppy plantations, the plantations are still prevalent in many government-controlled areas and officials have been criticised for sweeping the issue under the carpet.

Last year, around 355 hectares (877 acres) of poppies was destroyed by local authorities- a drop of over 90% since 2015 when around 4,000 hectares was eradicated. Seven militants and one official were killed during the attacks on eradication teams in 2016. Seven more people were maimed.

The Taliban is known for taxing poppy farmers in its controlled territory. Their taxation strategy is a key source of income that funds their insurgent activity against the government and NATO- led forces. “Most of the conflicts in Afghanistan are financed by income from poppy. Anywhere you see poppy in Afghanistan, you see fighting there,” Ahmadi was quoted in an online article on BBC.

The past decade saw billions of dollars invested on counter-narcotics policies. However, there have been few visible effects on opium production or cultivation. Moreover, more Afghans are getting addicted to drugs.

The report also wrote that 93% of opium is cultivated in southern, western and eastern parts of Afghanistan. The province of Helmand, that has seen a revival of Taliban presence, is known for being a key area for opium production, where over two thirds of the drug is produced there. The province was once a disputed area between the Taliban and NATO-led forces, before the NATO-led forces withdrew in 2014.Follow us on Social Media