On Friday, the Chinese daily reported that over 20 workers at crematoriums and private family businesses are in trouble with the authorities and have been called up by the CPIB for investigations.

Some netizens online have compared the CPIB action against these workers to the internal action Keppel leadership faced when their bribery scandal came to light. Facebook user Mohamed Jufrie Bin Mahmood wrote online:

“Some months ago a PSA forklift operator was hauled up by the CPIB and charged in court for allegedly receiving a $1/- tip. Two days ago a group of workers at the Mandai Crematorium were also taken in by the bureau for accepting CNY hongbao from mourners.

“Yes, take them to task if you have to, to keep Singapore corruption free. But strangely none of the Keppel boys were even called up by the bureau for bribing Brazilian officials with a whopping $50 million dollars. Only internal disciplinary actions were taken against those involved.

“Could it be that if they go to court and claim trial other senior and more important people might be dragged in and be implicated? State linked companies do not just release such a huge amount of money without getting a nod from some big wigs. Singaporeans want to know who are they. How much more ridiculous can things get?” 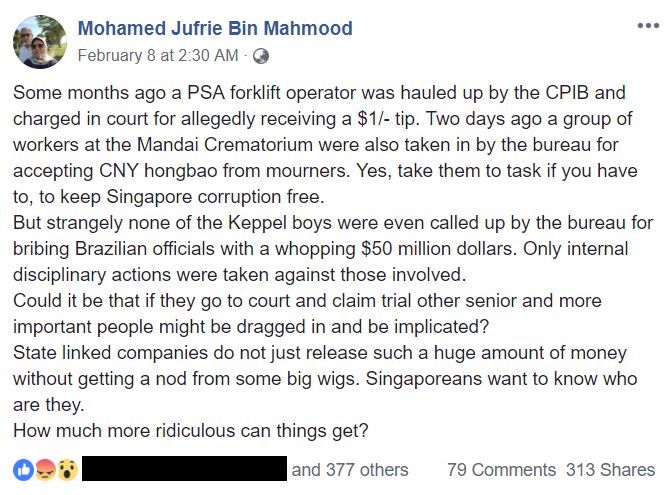