The Independent News
Home News Featured News Netizens claim they can see God walking in the sky as viral... 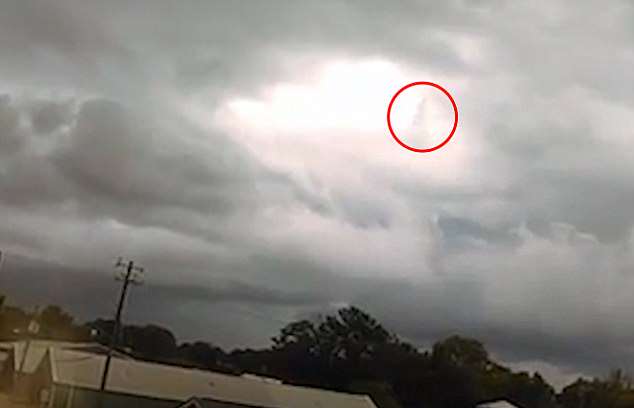 A video capturing a shadowy shape in the sky as a storm brews has led thousands of netizens to believe that the shape is God walking among the clouds. The video has quickly gone viral after it was posted online, last week, garnering over a million views.

The viral video, which was shot by Facebook user Solo Dolo in Tuscaloosa, Alabama, shows a storm brewing as Solo says, “Hey, we’ve got a storm over here. We got no power, everything blowing over here, boxes trees.” Focusing on a brightly lit patch in the sky, Solo adds, “Look at that hole right in the sky…that’s who’s got the power…He got us covered at least, we’re alright.”

It was only after the video was uploaded that Solo was informed that the shape in the clouds appears to look like a moving human body with arms and legs, walking between the brightly lit patch in the clouds. Many netizens believe that this strange shape is the figure of God.

Solo said: “Can’t tell me my God ain’t real! Thank you God for using Lisa StandAlone Baker to reveal this to me. Too see this is to believe this.”

Something similar happened in Singapore two years ago when several netizens thought that a cloud in Singapore’s horizon looked, not like God, but the late founding Prime Minister Lee Kuan Yew.

A pro-PAP Facebook group, Fabrications About the PAP, shared a picture with the caption, “by Adrian Peh: Do you see what we saw. No photoshop. Taken at 4.11pm today at Gardens By the Bay East. Pls credit my friend. Garrick Lin.”

Fans of the page almost immediately recognised ‘who’ the overbearing figure over the Gardens by the Bay is.

The late Mr Lee Kuan Yew however, did not believe in the afterlife. In his book, “One man’s View of the World,” published in 2013, Mr Lee said:

“I wish I can meet my wife in the hereafter, but I don’t think I will. I just cease to exist just as she has ceased to exist—otherwise the other world would be overpopulated. Is heaven such a large and limitless space that you can keep all the peoples of the world over the thousands of years past? I have a large question mark on that.”