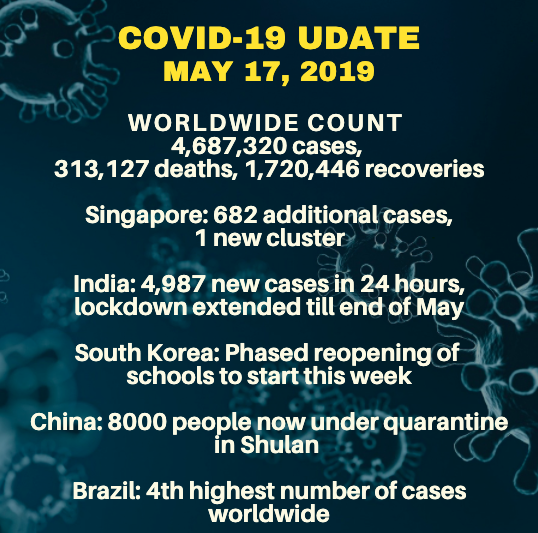 The Ministry of Health (MOH) said on May 17 that there are 682 new Covid-19 cases in the country. Singapore now has a total of 28,038 confirmed cases. There were 998 more people discharged from hospital, for a total of 9,340 recoveried.

Among active cases, 17,466 people are recovering in community facilities. There are 1,210 people under treatment in hospitals, with 16 in critical condition in intensive care units.

India saw its biggest uptick in cases within a 24-hour period, with nearly 5,000 cases. The country’s number of cases has now exceeded China’s. India’s infection total now stands at 90,927 and the country has a death toll of 2,872.

The Ministry of Home Affairs announced that India will stay under lockdown until the end of May. People are encouraged to work from home, and schools remain shut. They are also only allowed out from 7:00 am till 7:00 pm, and international and domestic air travel has been banned.

South Korea: Phased reopening of schools to start this week

On Wednesday, May 20, some of South Korea’s students will be returning to school, the first of a planned phased reopening. After a new cluster emerged from nightclubs in Seoul’s Itaewon district wherein 168 people have been infected with the coronavirus, it was discovered that some of the people present that night were teachers and students. However, South Korea’s Vice Education Minister, Park Baeg-beom said they have all tested negative for the coronavirus.

Health officials have put at least 8,000 people in Shulan, northern China under quarantine in an attempt to prevent a second wave of widespread infections. Top health expert Dr Zhong Nanshan told CNN that curbing the spread of new cases is still a “big challenge” for China.  Chinese Vice Premier Sun Chunlan has expressed the need for “more decisive, precise, flexible, and effective measures in regular epidemic prevention and control to avoid further spread of the Covid-19 outbreak.”

Brazil now has 233,500 confirmed Covid-19 cases and has now overtaken Spain as the country with the fourth-largest number of infections around the globe. The country has reported 15,600 deaths. From May 15 to 16 alone, 14,919 new cases were reported, along with 816 new deaths on May 16.

Peru and Chile are also emerging as Covid-19 hotspots in South America, due to the increasing number of coronavirus infections.—/TISG

Read also: Leaders ‘aren’t even pretending to be in charge’: Obama

Leaders ‘aren’t even pretending to be in charge’: Obama