India — Mira Rajput is missing husband Shahid Kapoor and she took to social media to remind him of the same. Taking to Instagram stories, she dedicated a cover version of Lucky Ali’s O Sanam to him.

Sharing the song, Mira tagged Shahid and wrote, “Missing you”. Whenever Shahid is away from home, Mira shares adorable posts to remind him that she misses him. 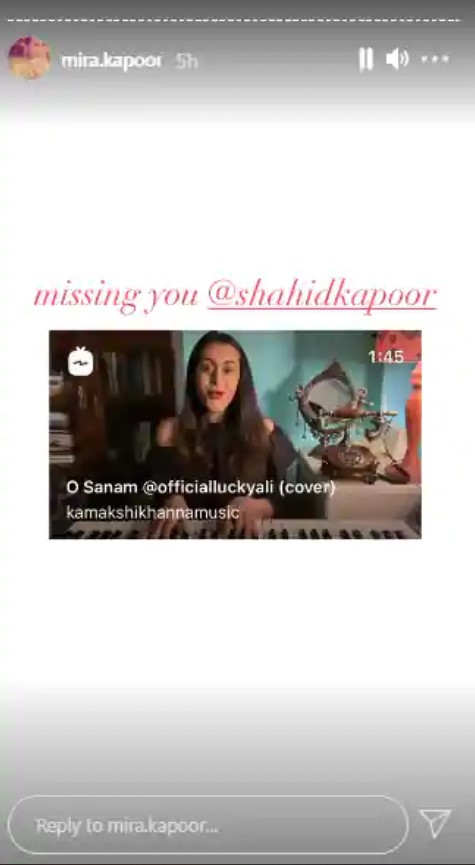 Recently, she conducted a ‘this or that’ session on Instagram and responded to her fans’ questions with some fun answers. When a fan asked her to choose between Shahid and their children, she replied with, “we both share the same children”. The couple has a daughter, Misha, and a son Zain.

In the series of questions, she was also to chose her favourite celebrity between Shahid and AB de Villiers. Choosing the South African cricketer, she wrote, “I will use my ghar ki daal lifeline for this question.”

When asked to choose between Tommy Singh and Kabir Singh–two characters played by Shahid, Mira selected Kabir, saying, “at least he loves someone else other than himself.”

Shahid had played the self-obsessed rockstar Tommy in the controversial movie Udta Punjab. In the commercially successful but critically panned film, Kabir Singh, he played the titular role. It was a remake of Telugu hit, Arjun Reddy.

He recently completed the shoot of his upcoming sports drama, Jersey. It is a Hindi remake of the Telugu movie by the same name.

Shahid portrays the role of a cricketer in the movie. Jersey also features Mrunal Thakur and Pankaj Kapur in supporting roles. The original film starred Telugu actor Nani and Shraddha Srinath, and was directed by Gowtam Tinnanuri.

Shahid is also set to make his digital debut with an upcoming Amazon Prime series directed by Raj & DK.Follow us on Social Media