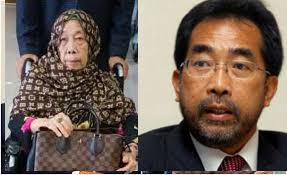 The mind-boggling wealth of a politician who died in a helicopter crash on April 4, 2015, went viral after his family started to pursue their fair share of the wealth.

The late Jamaluddin, the former Rompin MP, who is said to be a close confidant of former prime minister Najib Abdul Razak and had held various cabinet posts is reported as having amassed mind-boggling wealth.

The helicopter crash took the lives of private secretary to the prime minister Azlin Alias and six others. It crashed into the jungle at Jalan Sungai Lalang in Kampung Pasir Baru, near Semenyih, Selangor.

The story of his unknown wealth became viral after news of his 85-year old mother seeking her share of her late son’s estate.

Aminah Abdullah, 85, applied for an inheritance certificate today worth more than RM2.1 billion, comprising of a few houses, land and companies in Malaysia, Mecca and the United States, said The Sun.

Living children will receive the remaining of the estate.

Netizens are asking “how on earth can a career politician have left behind assets which is said to be worth at least RM2.1 billion.”

A Whatsapp message circulating in Malaysia says the inventory of assets would drop even a trained and ‘creative’ accountant’s jaw.

“It comprises 21 or 22 landed properties, mostly in Pahang and in the Klang Valley, 21 bank accounts with a total sum of more than RM15 million, including one account in the United States, and shares in 15 companies,” it said.

But The Coverage says in the early 1980s he started his engineering consulting company called J & A Associates. By the year 1986, he then bought a company called EPE Power which manufactures electrical and power equipment.

He then listed this company on the KLSE under the name EPE Power Corp Bhd in the early 1990s.

Some netizens are saying under the ‘new’ Malaysia – that promises Rule of Law for all citizens – the people have a right to know how on earth could one individual have kept such a whopping wealth while no one knew about it or everyone who knew about it just ignored it.

Others are now urging the Pakatan Harapan government to investigate all the ex-Ministers, Umno and Barisan Nasional members and their associates for amassing billions that are not known to the public.

“And mind you 21 bank accounts, and accounts in other countries with what amount of money in them, that is not known,” said some netizens.

Some are asking what type of monitoring system was in place under Najib Razak that lets individuals to amass such a treasury.

Others are saying the onus is now on the Pakatan regime of Tun Dr Mahathir Mohamad to prove that they are not only talking but acting.

The government has not said anything on the reported wealth of the political figure who was also a special envoy to the US.Follow us on Social Media