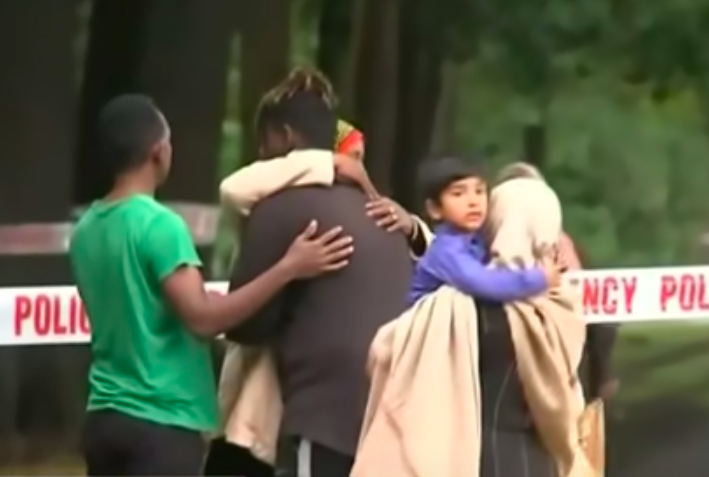 Christchurch — In New Zealand’s worst-ever terrorist attack, 49 people were killed and 48 others wounded when at least one gunman opened fire at two mosques during Friday prayers.

Prime Minister Jacinda Ardern condemned the shootings as an act of terrorism, and said today is “one of New Zealand’s darkest days.”

The national security threat level has been raised to high for the first time in a country usually thought of as peaceful and safe. Police had earlier warned Muslims to stay away from mosque Friday prayers and assigned armed guards to all mosques. Police stated that they are not looking for other “identified suspects.”

The attack at Al-Noor mosque — the first of the two attacked mosques — was live-streamed on Facebook by the gunman who wore a head-mounted camera.

The graphic video shows a gunman driving up to the mosque, entering just as people were beginning to pray, and then shooting randomly. He leaves the mosque for his car to exchange guns, and then returns to shoot those who seemed to be still alive.

Many worshippers were then seen lying on the floor bloodied — wounded or killed.

Police pleas for people not to share this footage have been largely in vain as social media sites were caught off guard in removing the video quickly enough.

At press time, police commissioner Mike Bush confirmed that the number of casualties was 49. There were 41 killed at the Al Noor mosque, and seven more at the second mosque in Linwood. One more victim died in hospital.

Among the victims were children, according to medical staff who had attended to the wounded.

Present in one of the mosques when the shooting occurred was the Bangladeshi cricket team, whose members are visiting the country for several matches. While they all survived, three other Bangladeshis were among those killed, and one more Bangladeshi is currently missing.

Survivors of the shooting described the gunman as blond, white and dressed in a bulletproof vest, and helmet.

It is still uncertain whether the same gunman carried out the shootings at both mosques.

In police custody were three men and one woman , athough one was later allowed to leave.

Firearms from detained individuals have been seized while explosive devices were found in the vehicle of one of those detained.

Police are also determining if the other two people are involved in the shootings.

One man, said to be in his late 20s, has been charged with murder, and will be appearing in court on Mar 17. Thought to be Australian right-wing extremist Brenton Tarrant, the terror suspect had earlier published a 74-page manifesto calling immigrants “invaders.

Later, Australia’s prime minister Scott Morrison confirmed that one of the men that New Zealand’s police had detained is Australian and added that Australian authorities were working closely with their neighbouring counterparts to bring culprits to justice.

New Zealand’s PM addressed the nation after the attack, saying, “We were not chosen for this act of violence because we condone racism, because we are enclave for extremism. We were chosen for the fact that we are none of these things. It was because we represent diversity, kindness, compassion, a home for those who share our values.”

To the terrorists responsible, she admonished, “You have chosen us but we utterly reject and condemn you.”

Two days before the attacks, the account of an individual going by @brentontarrant showed photos of a rifle and various other military equipment that were decorated with messages, and names linked to white nationalism.

On Fri morning just prior to the massacres, there was an anonymous post on 8chan, a discussion site widely known to feature hate speech.

The writer of the post said he would “carry out an attack against the invaders.” He included a 78-page manifesto, as well as links to a live stream on Facebook on the account brenton.tarrant.9, wherein the shooting was later viewed.

The shooter identified himself a 28-year-old Australian citizen and used the term  “white genocide” as his motivation for the attacks. This term is employed by racist groups when referring to immigrants and the spread of minority communities within a certain area.

In the aftermath of the shootings

Pakistan Prime Minister Imran Khan said, “I blame these increasing terror attacks on the current Islamophobia post-9/11 where 1.3 billion Muslims have collectively been blamed for any act of terror.”

A statement from Al-Azhar University in Egypt said that the shootings “violated the sanctity of the houses of God. We warn the attack is a dangerous indicator of the dire consequences of escalating hate speech, xenophobia, and the spread of Islamophobia.”

Indonesia’s Foreign Minister said that there had been six Indonesians in one of the mosques when the shooting occurred. Three had been able to escape but the whereabouts of the other three is yet unknown. The ambassador from Afghanistan said that three Afghans were among the wounded.

According to a 2013 census, only 1 percent of New Zealand’s population are Muslims.

Statement from the MFA

Singapore’s Ministry of Foreign Affairs (MFA) issued a strong statement of condemnation regarding the shootings: “There can be no justification for such attacks against civilians at the two mosques.

“We extend our deepest condolences to the victims and bereaved families, and wish the injured a speedy recovery.”

While there have been no reports of Singaporeans affected by the shootings, the MFA is helping citizens who have family in Christchurch who have reached out to the ministry.

Prime Minister Lee Hsien Loong also expressed his sympathies on Facebook. “New Zealand is far away from the upheavals and turbulence of the Middle East, and far away from Southeast Asia and its terrorist groups, yet it experienced this attack. It is a sombre reminder that terrorism remains a serious threat across the world, and that Singapore must be constantly vigilant and prepared. This heinous act is an attempt to spread fear and hatred, and create divisions within societies. We need to respond with unity, fortitude and resilience.

“I am writing to New Zealand PM Jacinda Ardern to express my deepest condolences to the families of the victims. Singapore stands in solidarity with the people of New Zealand to strongly condemn such vicious acts of terror.

“To Singaporeans in Christchurch: do stay safe and keep your families informed of your whereabouts.”