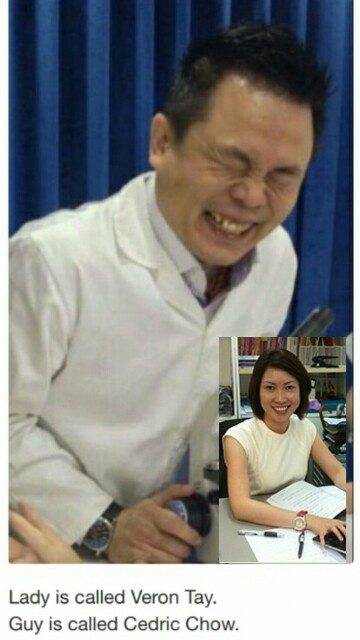 Chinese Daily Lianhe Wanbao today exposed the ugly past of the man who banged an elderly man at Lorong 8 Toa Payoh hawker centre. The man who has since been identified as Chow Chuin Yee, a director at Novel Learning Centre.

The Chinese Daily quoted a 60-year-old neighbour saying how Chow banged on his shoulder and taunted him after doing so. He later made a police report on the elderly man.

The neighbour who declined to be named said he was returning home with two large bags after grocery shopping, when Chow deliberately knocked into him to get into the lift.

When the neighbour confronted Chow for banging on him, the bully caught hold of his hand, came close to his face and taunted: “Hit me, I’m standing here for you to hit”.

The neighbour said he made a police report, but soon realised that Chow too had made a report, alleging that the neighbour had hit him.

In another incident, Chow is seen performing a ‘flying kick’ at his condominium’s gate, when the security officer was late in opening it as he was in the toilet. His rage was captured in the CCTV.

Chow rose to notoriety after he pushed the old man at the hawker centre in Lorong 8 Toa Payoh. The Police later arrested Chow man and his 39-year-old wife, Veron Tay, for causing public nuisance.

Some reports claim that Chow is the chairman of a Resident’s Committee. Novel Learning Centre  is solely owned by Alida Trading Pte Ltd, and Chow is the only listed director of the company. He also owns a renovation company.Follow us on Social Media