Malay woman stands up against religious policing during Ramadan 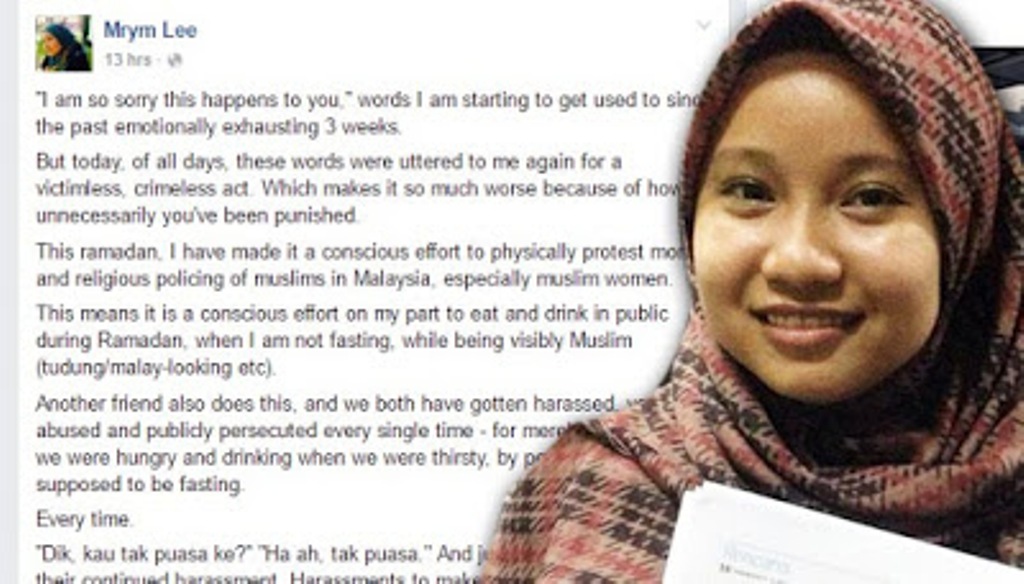 PETALING JEYA – A Muslim woman who goes by the name ‘Mrym Lee’, has ignited a debate on the issue of moral policing in Malaysia. An activist, she wrote about how she and a friend were harassed in public when they both decided to make a protest against moral and religious policing by deliberately eating and drinking in public during Ramadan. She was wearing a hijab, when she did that.
She said that on one occasion, a restaurant manager in a Kuala Lumpur shopping mall questioned whether she was a Malay and Muslim, and why she was not fasting. When she said that eating and drinking were not against the law, the manager responded to her by saying that she was “damaging” the image of Islam.
“I then went to him, explaining how he’s been rude to me as a customer, and he explained that religious authorities could raid the restaurant and mete out penalties for serving Muslims during Ramadan.”
A few minutes later, a Malay Muslim customer who was at the restaurant with his family approached her and accused her of not respecting those who were fasting. He told her that she was not respecting Islam.
Mrym Lee said that such religious policing of other people’s personal beliefs which was rife in Malaysia was a backwards mentality and was worrying.
“Get your priorities straight. Go punish our corrupt politicians and fix our messed-up policies. Leave the practice of faiths to the individual, empower each other in society to do good, only then we’ll see productive progress,” she wrote.
Her post (which has since been taken down) and the subsequent polls on her Twitter account have drawn mixed views.
Some commenters supported her, saying she was right to stand up for her rights. Others said that while she was within her rights to eat in public when not fasting, it was disrespectful to do so in front of others. One commenter said that eating in front of fasting children made it hard for them to keep up with their fasting. A number of commenters also chastised her and questioned her lack of common sense.
Mrym ran two polls in response to the incident at the restaurant. One asked: “If you are visibly Muslim (wear a hijab/look Malay), do you eat in public during Ramadan?” In the other she asked: “Do you believe it’s wrong for Muslims to eat and drink in public during Ramadan?”
Out of the 1,031 respondents to the first poll, 60 percent said “No, because others are fasting”; 23 percent said “Yes, I do. It’s not wrong”; and 17 percent said “No, because I’m afraid of getting caught”.
Of the 878 who responded to the second one, 60 percent said, “No, it’s not wrong”, while 40 percent believe that “Yes, it’s wrong”.Follow us on Social Media