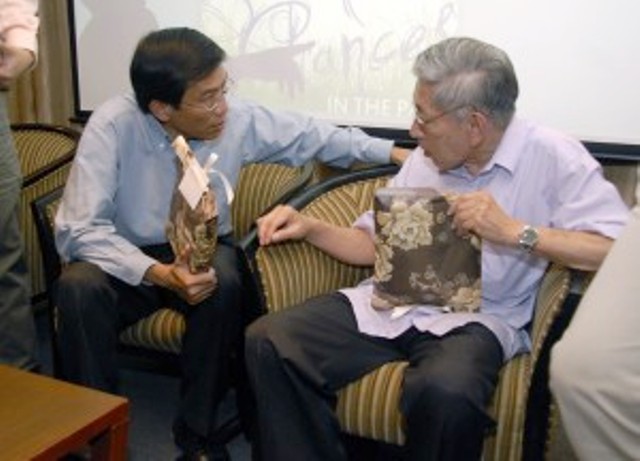 On the eve of Cooling-Off Day for Bukit Batok by-election, Mrs Lina Chiam has spoken to an academic, Derek Da Cunha, to explain why relationship between the Chiams and the Singapore Democratic Party (SDP) broke down soon after their meetings in 2011.
Mrs Chiam the chairperson of Singapore People’s Party (SPP) told Mr Da Cunha plainly that SDP’s claims that in the 2011 meetings between the Chiams and SDP’s leadership, Dr Chee was willing to let Mr Chiam return to the SDP and head the party, were false.
She said: “Among their [the SDP representatives] proposals was that Mr Chiam should return to SDP by himself to take on a non-CEC position as Honorary Chairman, or a similar position that will acknowledge his role as the founder of SDP.”
Mrs Chiam further added that SDP further laid down “their condition that the proposal had to be accepted within one week, among other terms, (therefore) it was a non-starter.”
Mrs Chiam also took to Facebook to explain why she took issue with SDP circulating an older edition of their newsletter with Mr Chiam’s picture in it. She claimed that SDP had re-circulated the newsletter in the early days of their walkabouts in Bukit Batok, and so she objected to it.
Dr Wong Wee Nam, the man who had tried to bring the Chiams and SDP together, had written a note on behalf of SDP when the Chiams came out to say that they were not endorsing anyone for the Bukit Batok by-election. Dr Wong asked the Chiams why they were upset with an old edition of SDP’s newsletter, and also detailed what happened at the meetings between the Chiams and SDP.
Mrs Chiam told Dr Wong in her Facebook that he was “missing some of the facts pertaining to the meeting (which) needed clarification from our side.” She said that there is a book which is being written that will cover in part about the events in SDP in 1993.
“I believe the public should await its publication to get a balanced perspective of the whole SDP saga in 1993,” Mrs Chiam said.
A Facebook user Stan Chee confronted Mrs Chiam in her post. He posted a picture the Chiams had taken with Potong Pasir’s current MP Sitoh Yipin and Aljunied GRC’s former MP Lim Hwee Hua.

The Facebook user claimed that the photo was taken a few days before Bukit Batok by-election, and asked if the Chiams were moles. “So friendly to PAP, but want to close down opposition,” he said.
Mrs Chiam responded to him and asked, “What’s wrong with the photo may I ask? I am not a puppet! I have my own integrity and honesty that dare to speak the truth even at the cost of being critcised unfairly.”
To which Stan replied: “Whatever quarrels you have with Chee Soon Juan, or how much you like PAP is your own personal matter. This is not about your own selfish interest. It is about Singapore’s future. Singapore needs more opposition in Parliament. If you have a quarrel with Chee solve it privately. This is about Chiam’s legacy – don’t spoil it. Still not too late for SPP. All the opposition parties including Workers’ Party have already supported Chee. Please support him before cooling-off day and save Chiam’s legacy.” (edited)
Another Facebook user Edmund Ho told her, “Mrs Chiam, please give it a break on old grudges. I’m 35 this year and I don’t wanna hear about what happened in 1993, when I was 12 years old.
What I want to know is how to improve my life going forward. I don’t really care or want to know about your past grudges, who’s right or who’s wrong. Give it a rest.
What I can deduce from this episode is that Singapore does not have an united opposition with comments like your coming at such a sensitive time. I’m very disappointed in your actions.”Follow us on Social Media