Another feather on the cap for Lee Suet Fern

Calling his wife an “accomplished quilter”, Mr Lee wrote: “My wife, apart from being a corporate lawyer, is also an accomplished quilter. One of her quilts has just won an award at the 2019 Yokohama Quilt Festival. The quilt is called Castel del Monte because of the octagons in the quilt.”

The write-up accompanying the quilt, written by Mdm Lee, is as follows: “Octagons in quilts have always fascinated me. Old castles conjure dreams of fairy tales. I wanted to create a quilt with octogons using traditional european reproduction chintz fabrics but to include movement within the octogons. Castel del Monte is a protected World Heritage European castle with octogonal towers and an octogonal footprint. The romance of a fairy-tale castle in a quilt.” 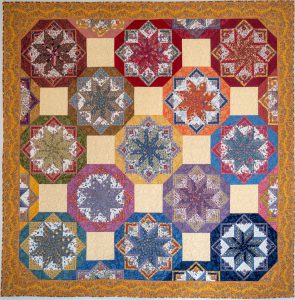 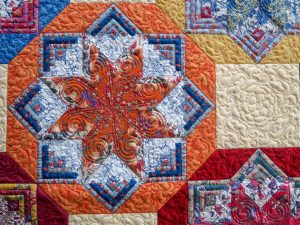 Revealing that she picked up the activity over two decades ago, Mdm Lee told the publication: “Professional work will always take precedence, but this is a hobby which has become my passion. I sew through the night because I’ve got some momentum.”

She added that she picked up knitting while she was in university because she noticed her then-boyfriend, Mr Lee, only wearing jumpers handmade by his mother and did not want to be outdone. Sharing that she learnt how to knit and sew after reading a guidebook, she said: “That was what really sparked it off. He didn’t have any store-bought jumpers. Not to be outdone, I wanted him to wear jumpers I had knitted too.”

Knitting also helped Mdm Lee bond with her mother-in-law, Mdm Kwa Geok Choo. Recalling fond memories of knitting with her mother-in-law as she had her first child, Li Shengwu, Mdm Lee said: “We madly knitted. I think my son had the largest collection of baby booties at that time. I still have some of those booties today, carefully stored away.”

Today, the Attorney-General’s Chambers (AGC) have initiated action against Mdm Lee and her son Li Shengwu. The AGC initiated contempt of court legal proceedings against Li Shengwu over a private Facebook post before filing a 500-page complaint against Mdm Lee to the Law Society.

The AGC alleged that Mdm Lee would be liable for professional misconduct if she had prepared Lee Kuan Yew’s will, since her husband – Lee Hsien Yang – is a beneficiary of the will.

The AGC’s action against Mdm Lee and her son re-ignited the Lee family feud which spilled into the public domain two years ago, when Lee Hsien Yang and his elder sister, Dr Lee Wei Ling accused their elder brother – Prime Minister Lee Hsien Loong – of abusing his power to preserve their family home, against their father’s willed desire to demolish the house, in order to bolster his grip on power.

The siblings also alleged that PM Lee used state organs against them and that he was moulding his son, Li Hongyi, to enter politics. They also said that the Government convened a secret committee to make a decision on the house.

Dr Lee and Mr Lee reinforced their allegations, following this, but offered a ceasefire on releasing further evidence in favour of settling the matter in private, on the condition that they nor their father’s will be attacked or misrepresented.

For months afterwards, the younger siblings remained silent – until the AGC initiated action against Mr Lee’s son and wife.

Both siblings have since have vehemently denied any claim that Mdm Lee played a part in preparing Lee Kuan Yew’s will and said that the will was drafted by Kwa Kim Lee, their cousin who is the managing partner of Lee & Lee.

On 30 Apr, Dr Lee Wei Ling cast doubt upon Kwa Kim Lee’s statements as she released email correspondence between her father and Kwa Kim Lee, said to be proving that the lawyer prepared the last will.

My wife, apart from being a corporate lawyer, is also an accomplished quilter. One of her quilts has just won an award…