Jo Teo slammed for asking people to weigh 60,000 unemployed workers against the 97 per cent who are in jobs

Netizens responding to Minister Teo's remarks criticised her for appearing to brush away the reality that there are tens of thousands of workers without jobs.

Manpower Minister Josephine Teo has drawn sharp criticism online after she suggested that people should weigh the 60,000 workers who are without jobs against the 97 per cent who have jobs.

Mrs Teo was speaking at a media event on Wednesday (27 Nov) when TODAY asked her to comment on the disconnect between Government statistics showing employment growth and ground sentiments that jobs are not readily available. Responding that the Government needs to find more ways to show job seekers where the available jobs are, the ruling party politician added:

“At any one time our unemployment rate is maybe about 3 per cent. Now even with a resident workforce of 2.3 million, 3 per cent is still about 60,000 people. So, for 60,000 people to tell you that they haven’t seen the jobs, it’s not so surprising itself. But weigh that against the 97 per cent who are in jobs, you also can reflect their views.”

Netizens responding to Minister Teo’s remarks criticised her for appearing to brush away the reality that there are tens of thousands of workers without jobs with her comment that the people should essentially look at the bright side of the situation.

Asserting that “60,000 without jobs could well translate into 60000 families struggling to make ends meet,” netizens suggested that the Minister’s comment shows just how out of touch she could be with ordinary Singaporeans’ concerns: 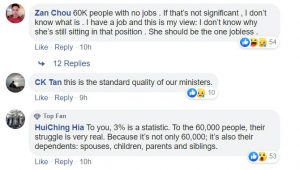 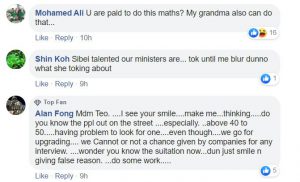