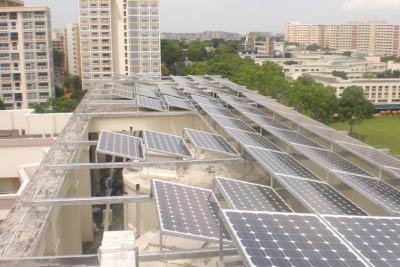 It was reported by TODAY that the government has called for a solar leasing bulk tender, for the installation of solar panels at 636 HDB flats and 31 Government sites including schools and food centres (‘HDB looking to install more solar panels islandwide‘, 17 Oct 2016).

Calling a bulk tender means solar energy can be harnessed at a lower cost owing to economies of scale, the report said. The tender, a second one, is said to worth about $100 million.

In the first solar leasing tender last year, some 831 HDB blocks as well as eight MHA and PUB sites were targeted. The current tender, which is for a total capacity of 40 megawatt-peak (MWp), will close at the end of this year.

Installation is expected to be completed in the first quarter of 2019. This takes the number of HDB blocks ready to harness solar energy — to drive common services such as lifts, lighting in common areas and pumps — to 2,500, which will help town councils to mitigate rising energy costs.

More solar leasing tenders are expected to be called in the next four to five years. HDB’s target is to install solar panels for 5,500 blocks by 2020, enough to supply clean energy for the equivalent of 55,000 four-room flats annually.

In the news report, it said that the harnessed solar energy will be used to “drive common services such as lifts, lighting in common areas and pumps” to help town councils mitigate energy costs. It’s not known if the free solar energy will also be used to mitigate individual HDB household’s energy fees as well.

With all these high tech solar panels installed for HDB dwellers, does that mean that electricity fees and conservancy charges for the HDB heartlanders will likewise be reduced soon?

Or are PUB and the town councils simply going to keep the fee reductions to themselves, despite the fact that those solar panels are paid for by the people?