Ex-opposition politician Jeannette Chong-Aruldoss sparked concerns over how foreign workers are unsafely transported from place to place by their employers after she highlighted how she noticed a lorry carrying passengers while being padlocked from the outside.

The former Singapore People’s Party (SPP) member raised the issue on social media after she noticed the lorry travelling along Rochor Road on Saturday (3 Oct), around 1.55pm. Sharing photos of vehicle on Facebook, she wrote:

“Why padlock from the outside? I cannot work out why. This lorry carrying passengers inside caught my eye. I won’t find fault with its cage-like appearance, but then I saw that it was padlocked from the outside.”

She added: “If it were me, I would never want to be inside a vehicle or anywhere which has been padlocked from the outside. Perhaps that’s just me.”

Why padlock from the outside? I cannot work out why. This lorry carrying passengers inside caught my eye. I won't find…

Several netizens, such as activist Kirsten Han, responding to Ms Chong-Aruldoss’ post agreed that the way the lorry was padlocked from the outside poses safety hazards to the passengers within. Ms Han said, “That is so incredibly dangerous — if there were an accident these men wouldn’t even be able to get out of the truck themselves!”

When others said that this would not be sufficient since every second counts in an accident, she replied: “I want to keep an open mind – maybe there is a side entrance I could not see. If not, then I think the treatment of the passengers like cargo is normalised if we see this without batting an eye.”

Pointing out that there is no regulation that such passenger carrying lorries need to be installed with proper seats and seatbelts, she questioned whether installations costs are an issue that cause such unsafe arrangements. She asked: “This lorry bears the signage “23 pax” but does it look equipped to carry passengers?

“There is currently no regulation mandating passenger carrying lorries to be installed with proper seats let alone seatbelts. Is the cost of installing such safety equipment an issue? Should safety be sacrificed for the sake of not increasing operating costs?”

Several others asked the former SPP member to report the matter to the relevant authorities. Liew Kai Khuin, a former Assistant Professor at Nanyang Technological University, said: “You have to report this to MOM and the police of this inhuman treatment”

Seconding Mr Liew’s view, many others urged Ms Chong-Aruldoss to help save lives by reporting the license plate number to the authorities: 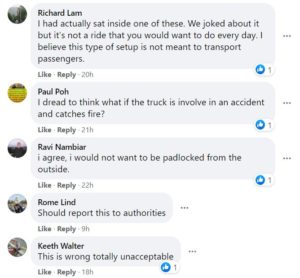