Grace Fu: Chee has no steady job for many years 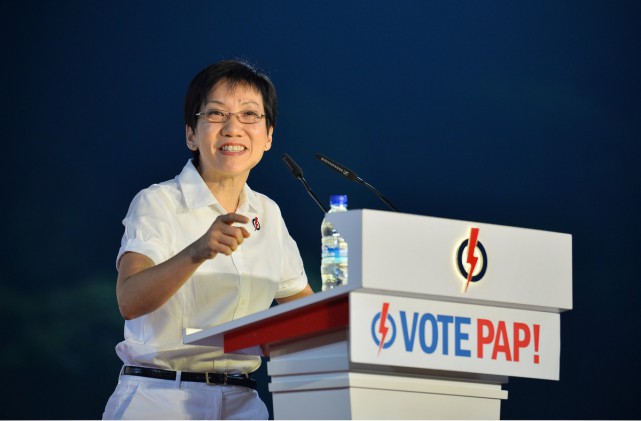 Speaking at the PAP’s first rally for the Bukit Batok by-election yesterday, Ms Grace Fu, who is the Minister for Culture, Community and Youth, told the rally attendants that she doubts the ability of SDP and its secretary-general Dr Chee Soon Juan to run a town council, should he be elected in Bukit Batok.
In particular, she attacked Dr Chee for not holding down any jobs in the many years.
Ms Fu said, “Dr Chee hopes to be a full-time MP. But you should note he’s not actually giving up a full-time job. As far as I know, he hasn’t held a steady job for many years.”
“Let me be clear. I’m not criticising his position to not hold a full-time job for so long. That is his personal choice. But the work experience, or the lack of it, is a relevant fact when we consider the credentials of the candidate,” she added.
“Dear residents, you’re now considering two candidates for the job of an MP. If you’re recruiting one person for the job with two candidates, what do you do? You look at their work experience. What have they done? Is their experience relevant to the job?”

However, Ms Fu did not disclose that neither PAP’s candidate, Murali Pillai, would give up his full-time job in law firm Rajah & Tann should he be elected.

Dr Chee used to have a job at the NUS. He was in fact, sacked from the university, three months after he first entered politics to contest in the 1992 Marine Parade by-election on a SDP ticket. At the time, the PAP had always derided the SDP for putting up candidates like cab drivers and secretaries who could never run the country vis-a-vis scholar generals who supposedly could. SDP fielded Dr Chee to show otherwise. He was therefore seen as a serious threat to the PAP then.
Three months after the by-election, Dr S Vasoo, who was the boss of Dr Chee in NUS Department of Social Work and Psychology and also a PAP MP (Tanjong Pagar 1991-2001), sacked him. The alleged offence was that Dr Chee had used research funds assigned to him to express mail his wife’s doctoral thesis to her academic adviser in the United States. Dr Chee responded by saying the university had authorised the mailing and that he was the victim of a political vendetta. Dr Vasoo promptly sued him for defamation.
Motivation of serving the public
Ms Fu herself is no stranger to making controversial comments publicly.
During a Parliamentary debate on ministerial pay cuts in 2012 , Ms Fu had expressed concerns over the planned 36–37% income cuts for ministers, saying that if ministerial pay was further reduced in the future, it would “make it harder for anyone considering political office”.
She posted a message on Facebook, “I had some grounds to believe that my family would not suffer a drastic change in the standard of living even though I experienced a drop in my income. So it is with this recent pay cut. If the balance is tilted further in the future, it will make it harder for anyone considering political office.”
Her Facebook comments went viral immediately and drew numerous negative criticism from netizens on the Internet. Many questioned her motivation in joining politics.
Even the mainstream media noticed the burgeoning number of Internet postings questioning and attacking her (http://news.asiaone.com/News/Latest%2BNews/Singapore/Story/A1Story20120106-320189.html).
One netizen said, “Will her ability to carry out her duties be affected by her strong feelings towards the pay cut? Will the welfare of the nation and her ward be compromised?”
When contacted by the media asking for responses to Ms Fu’s controversial Facebook comment, many MPs, including Ms Fu herself, refused to comment further.
However, MP Hri Kumar Nair, said, “I think it is important for public leaders to communicate their thoughts and views, and they can choose any platform to voice them. With any form of communication, there is always a risk of being misinterpreted or misunderstood.”
MP Teo Ser Luck also came to her rescue, “Social media should be used to share views briefly and, when using it, we have to be ready to interact with the people online. A topic like ministerial salaries is a public issue and public views are diverse. There is a need to be careful and airing them through dialogue sessions, which are face-to-face, would be better.”Follow us on Social Media