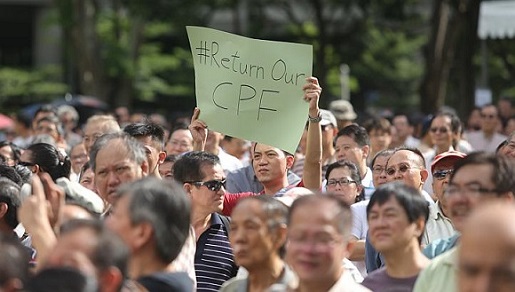 The continued retention of CPF savings is a lose-lose situation for the PAP government and citizens. This is because GIC is forced to invest at inflated prices in an artificial low-yield environment while retirees are prevented from accessing money which belongs to them..

GIC was clearly aware of heightened investment risks since 2012 which is why its cash increased from 3% to 11% (pg 13). But its market call then was wrong and it had subsequently gone on a buying spree, regardless of inflated prices. Two months ago, GIC sounded another warning when it reported lower 20-year returns and warned of tough times ahead.

Group CIO Lim Chow Kiat: “These difficult investment conditions can stretch for the next 10 years.” Lim is right to be pessimistic as even novice investors are aware that greater uncertainty and a higher degree of volatility lie ahead. He also pointed to the high levels of debt in some countries.

Every country been increasing their debt to record levels: Investment gains are all fueled by trillion$ of debt.

During the last 3 years, $67 billion in CPF monies have already been invested in overpriced assets. How much more risk should CPF members continue to bear?

In 2014, DPM Tharman told Parliament that GIC could not even make CPF rates in 8 out of 20 years. With global interest rates much lower today, GIC will soon be in trouble. Should another financial crisis erupt, will PAP delay CPF withdrawal further? Is PAP reviewing the legislated CPF minimum rate and planning to lower it?

By returning all CPF monies in the RA and MA to their rightful owners, GIC would then not be forced to take unnecessary risks.

Isn’t this a win-win situation?Follow us on Social Media