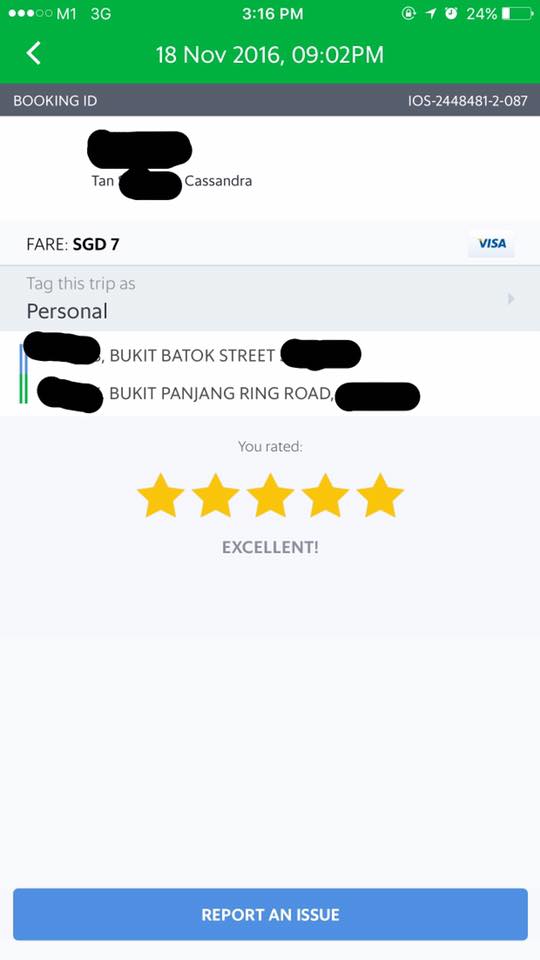 Grabcar driver Cassandra Tan shared in her Facebook about how she was fortunate enough to give a listening ear to a foreign worker from India who had lost his wife after childbirth in India. Her post has gone viral with over 2,000 shares with many expressing support at the drivers thoughtful act.

Cassandra said that she got the booking in the wee hours of the morning yesterday. When she called her passenger to find out where exactly he was, all he could tell her was that he was in Bukit Timah. Sensing that something was amiss, Cassandra went out of the way to locate the man.

She soon realised that the heartbroken man had walked there all the way from his dormitory and now needed a ride back. The man recounted to her that his wife died at childbirth and that he had pledged his newborn child to a neighbour in his village to pay for his wife’s gynaecological care. The man was in tears as he will never see his wife and child again.

She updated her post today saying that the man’s employers took pity on the man and send him back to India.

Just in case you can’t see what Cassandra posted, this is what she said.

—
My first passenger today brought me to tears and I had to hold it back till I dropped him off.

At 5.46am, I got a booking from Bt Timah Road. It didn’t state what number, just the road name. I called him, he said he didn’t know what number or where he was. He just said he was sitting at a bus stop at Bt Timah Road.

Bt Timah Road is so long. I asked him to describe what he saw nearby. He said cars, trees, at a bus stop. I asked him to look for the bus stop number, I got silence and muffling sounds.
Sensing something very wrong.

I said…just sit there and wait for me. I will find you!

From where I was, I thought…if the booking came to me. He must be at the few bus stops nearest to me, but Bt Timah Road was left and right. So I tried the right side first.

There he was… a lone Indian foreign worker sitting at the bus stop, looking around aimlessly.

I stopped my car, asked him if he had booked a car. He nodded. He opened the front door and asked if he could sit in front politely as he will vomit if he sit behind(his words).
He got in, I offered him a plastic bag and a sweet which he politely declined.

I confirmed his dropoff address, he nodded. He was upset. So I drove on, leaving him to calm down.

Halfway through, I asked him if he was okay. He nodded.

So I asked why he was at that bus stop (very quiet corner) so early that morning. He said he walked there. I said from where. He said from home.

Apparently home was where I was sending him now….very far from where he was.

So I casually mentioned…. wow that’s a very long walk.

So the talk continues…

Me: It’s ok. You can talk.
Silence then…..then he spoke.
(After this, I was quiet for a long time while he spoke)
His next words:
my wife die after born my baby girl.

In that little bit of English that he could speak….

He went on to say he and his wife were orphans at an orphanage and grew up together and fell in love.

They had to “betroth”(his word “sell”) their baby girl to a family in their village so they had money to pay for doctor visits for her pregnancy. The baby was supposed to be turned over to the family at age 12.

His wife died during childbirth and the family had claimed the baby girl after the hospital turned her over to them.

This man sitting next to me now will never have the chance to see his baby girl or even put his wife to rest.

After I dropped him off, I declined to take his fare and even wanted to give him money for an airfare home.

He simply refused to take it and said no use go home.

He just said “Thank you for hear me” and left.
He probably needed to be alone now.

4 hours later when I finished my driving…. as I was clearing my things, I found 2 $10 notes in a slot on the passenger door. He had stuck them there after I refused to take his fare.

I tried calling him on the same number…. it has been off the last many hours.

My dear friends, give your kids and partner a good cuddle and many kisses today please!

I managed to call through the phone this morning. It was picked up by another Indian man who said the phone is actually his and the man (his friend) had left this morning for home.
I asked how?

He said “Boss give money send”.

I hope he will be blessed and find peace within himself soon.

I didn’t expect this post to go viral but thank you to everyone who shared to let people know what some of our foreign workers face.Follow us on Social Media