Home News Government grants for hospital bills is possible only because of high taxes... 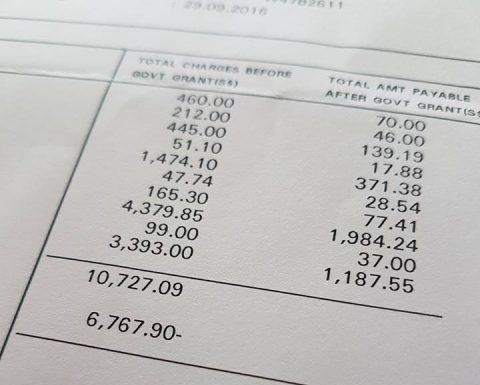 I refer to the article which said that Medishield Life only covered $720 out of a $10K bill for blogger Andrew Loh’s quadruple bypass surgery (https://theindependent.sg.sg/medishield-life-paid-just-covered-720-of-a-10k-quadruple-bypass-surgery). The bill showed that Andrew had a 63 percent grant from the government. And in all seriousness, that 63 percent grant from the government is real enough.

Those who are in the lower income strata will have a bigger grant. But is it really correct to think we pay nothing for the grant while the Swiss and other Europeans pay high taxes for their government to pick up an average 80 percent of the bill (not 63 percent okay but let’s not quibble because those right at the bottom might get close to this figure).

Well remember the large employer and employee contribution to your CPF. Good – then consider 2 things. The more important one is how much of your CPF is drained away by market based pricing of your HDB flat and the huge run-up in private real estate prices, both a courtesy of the government control of the land bank and its macroeconomic policy choices.

The revenues the government derived from the landbank go into the reserves from which the earnings are extracted under the constitutional spending rule, to be used for government expenditures such as healthcare grants like the one Andrew received. The other is the difference between the rate of return achieved by GIC investing in proceeds from debts owed to CPF and the actual interest paid to CPF accounts. This provide the same effect on the reserves albeit on a smaller scale.

No, we already pay high taxes, it is just that they are not called taxes, which is the reason why I prefer the term transfers from individual to state to describe everything we paid to the government and benefits such grants and CPF withdrawal as transfers from state to individual.

—
A version of this article first appeared in Chris Kuan’s Facebook.