Volunteers have the option to choose from several “Volunteering Areas of Interest” from house visits to working on the party’s website, to logistics, to helping out at grassroots events

Singapore—On Wednesday morning (June 10) the Workers’ Party’s (WP) Gerald Giam called for ‘a massive number’ of volunteers to help WP with the upcoming General Election, writing in a Facebook post that it may be held as early as next month.

Mr Giam, who had been a Non-Constituency Member of Parliament (NCMP) of the 12th Parliament of Singapore, enumerated the various duties wherein the help of volunteers would be needed, such as “manning polling agent posts to helping our candidates during house-to-house visits.”

He called it a “golden opportunity to step up to the plate and be counted” for those who have never volunteered to help a political party in the past.

“There is a part for everyone who has a heart for Singapore and an eye on our future,” Mr Giam added, and posted a link to The Workers’ Party GE Volunteer Registration Form. The form gives volunteers options to choose from several “Volunteering Areas of Interest” from House Visits to working on the party’s website, to logistics, to helping out at Grassroots events, and others. 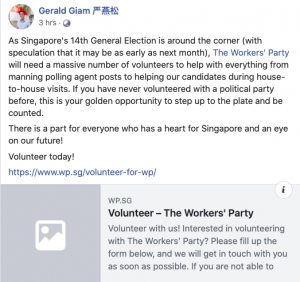 While the date of the upcoming elections has yet to be announced, speculations abound that it will be very soon, even as concerns have been raised regarding public health and safety as Singapore, and indeed the rest of the world, is still in the midst of the coronavirus pandemic. However, the circuit breaker restrictions that were put in place early in April began to be relaxed starting from June 2, with plans to lift even more restrictions by the end of this month. Many believe that this will pave the way for the GE to be held in July.

The following day, the Workers Party called on the Elections Department to issue a definitive announcement on the changes to campaigning rules, saying in a statement: “To date, there has been a distinct lack of clarity as to precisely how campaigning will be modified in view of the COVID-19 pandemic. Several Ministers have made vague and unspecific comments since March that campaign methods would need to be modified. However, despite the Party’s calls, there has been no definitive announcement by the Elections Department on these anticipated changes.”

Partly in response to the WP and to others calling for clarification for campaigning rules for the coming GE, the Elections Department announced earlier this week that the number of polling stations had been upped by 25 percent to 1,100 to avoid crowding which could result in the transmission of infections. Other measures such as giving only older citizens time in the morning to vote, as well as proposed “time bands” for other citizens to go to the polls were also announced.

The Elections Department said, “Voters are encouraged to cast their ballots during their allotted time bands, although they may do so at any time when the polling stations are open.” —/TISG