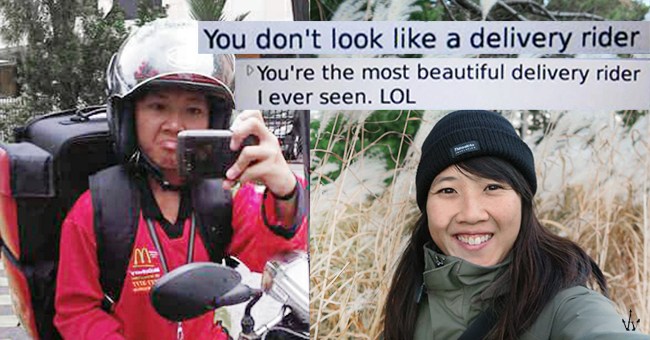 Yes it’s her again—Marian Poon, the 153cm-tall aircraft technician whose story you might have read. And guess what? As if fixing and cleaning clogged faeces in aircrafts weren’t adventurous enough, she used to be a McDelivery and Popeyes delivery rider for 7 years. And a competitive bowler. And rugby player. Who also does ballet, rock climbing, tap dancing and photography, but we digress.

Based at the soon-to-be-defunct Bedok Princess Macs, Marian juggled 4 jobs due to financial problems when her dad passed away.

From getting hit on by customers to delivering burgers to Geylang hotel rooms, welcome to the life of a Singaporean delivery girl.

Here are 10 experiences she shared with us.

During the Hungry Ghost Festival, I received a 3am order from one of the Lucky Heights houses, near Bedok Camp. My fellow riders told me to focus on the road and avoid looking into the rear mirror. I wasn’t that pantang (superstitious), so I grabbed my bag and rode off. The unit was located deep inside the estate and I had goosebumps to a point where I made a pitstop to take a breather.

One night, I delivered food to Geylang Hotel 81. A man, with a towel around his waist, swung open the door while a half naked lady was on the bed. He stood there shamelessly as I dug my bag for 45 cents.

3. Being Called Singapore’s Most Beautiful Rider

Someone told me, “you’re the first female rider I’ve seen in Singapore, please keep the change.” It was $28. A nice aunty also offered me hot milo when I made a delivery in the rain.

There are rude customers who will demand for the 5 cents change. Sometimes, I’ll fork out my own money to return them the smallest change I have.

One time, my Yamaha Spark skidded and a Pizza Hut rider came to my rescue. After I fell, he pushed my bike to the side as I organised my bag. Thankfully, I had already delivered the food. As my bike’s steering went out of alignment, he asked if I needed a ride back. *insert heart emoji*

Once, I sent a cup of hot tea which cost $4.50 with delivery fee. I thought I might as well just deliver the tea bag.

There was an aunty living opposite a McDonalds outlet in Potong Pasir who gave me the biggest McHeadache. She ordered a Hot Fudge Sundae, which I promptly delivered. However, she rudely exclaimed, “why is it melted? I want to speak to your manager.” I agreed to pass her the number and she replied, “wah so you show me attitude now lah?”

Eventually a fellow rider sent her a replacement order but she wasn’t appeased. I’ve also handled people who were furious they didn’t get a straw.

During the World Cup fever, some drunkards told me to stay over for dinner. As a delivery girl, you need to be firm and extra careful lest you be eaten.

Sometimes they’ll chat me up to find out about my background. When I tell them I’m a degree holder who just wants to earn some extra cash, they’ll offer me jobs in various companies.

It’s nice when people include directions to their unit in the comment section if their house is tricky to find. I was a hamster in a maze when I made a 4am delivery to a HDB flat due to the layout of the building. In the end I had to stand at level 1, count the number of floors, and climb the stairs to level 9. How’s that for cardio?

Like many occupations in Singapore, riders like Marian are people we frequently meet, but hardly get to know. While technology, like an online ordering system, feeds our laziness (and stomachs), we should appreciate the unsung heroes who help make our lives better.

Chevonne tends to notice irrelevant details in movie scenes and little quirks about people. In her previous life, she marketed F&B concepts. When not writing, she’s an imaginary music critique who is easily amused by lame jokes.

—
Republished with permission from Zula. ZULA is a new site catered to Gen Y Singaporean females.