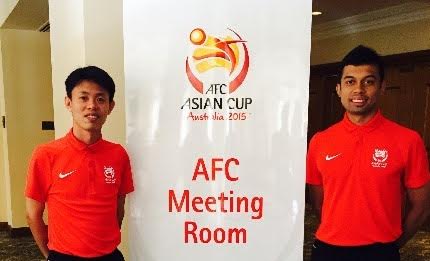 WHEN a world-class Singapore-branded football referee calls it a day, he expects a deserving pat-on-the-back especially after the Asian Football Confederation (AFC) gives him a special retiring award.

Not for 46-year-old Jeffrey Goh, who strangely got the silent treatment from the Football Association of Singapore (FAS).

Yes, silence is golden, so goes the popular phrase. That’s also a blessed line in football refereeing that whenever the men-in-black leave the field of play after 90 minutes in absolute silence, he’s done a tremendous job. No cheers or jeers needed.

That’s the thankless, if not unpleasant and ungrateful, job of the football judges, who usually get the brickbats more than bouquets, but still as amateur volunteers, they do a professional job, as in the S-League or the MSL (Malaysian Super League) to make quick-thinking decisions for 22 professional players, whose bread-and-butter are at stake.

Without reservations, I take my hat, heart and hand out to the men-in-black, who are usually unappreciated and scorned. And yes, usually used as a convenient scapegoat by any losing team.

So when Jeffrey Goh, a decorated Made-in-Singapore referee, leaves early this season after 20 years of distinguished service and gets a special momento from the Asian Football Confederation (AFC), I felt elated, ecstatic, euphoric, exultant, whatever.

But when he gets the post-award silent treatment from the FAS, it just leaves me red-faced, flushing with anger except to say that I concur with the three-alphabet FAS abbreviation: Forget After Service (FAS).

I recount here, fazed and fuddled, the recent fate of Singapore FIFA Assistant Referee Goh, a world-class flag-holder, who was among only 23 Asian men-in-black honoured with the AFC Referees Memento Award, in conjunction with the AFC Referee Assessors Seminar on January 19 in Kuala Lumpur.

Surprisingly, if not sadly, not a word was mentioned by the FAS in any of its foot-notes over media releases or social media on this distinctive award, which according to the AFC website, celebrated their endeavours to develop the game and the years of service to the sport.

Hey, this is not a run-of-the-mill retirement farewell gift. The qualifications to get the award are outstandingly high as the recipients must have served at least five years on the AFC Elite Panel and participated in more than 30 ‘A’ level international matches.

AFC General Secretary Dato’ Windsor John, who presented the elite awards, said: “While we will miss them on the field, I hope that they will continue to share their knowledge and expertise to develop the younger referees. As we celebrate their achievements, let us look to them for inspiration to build a better, brighter future for our Asian officials.

Jeffrey Goh, in my opinion, has always inspired as a role-model flag-bearer, in internal and international matches. He won the 2014 S-League Assistant Referee of the Year award, and was specially selected for the 2010 World Cup Finals in South Africa, which was the highest point of his two-decade career.

The 46-year-old freelance car broker, with a nine-year-old daughter and six-year-old son, became a FIFA referee in 2006 after first deciding to voluntarily don the black uniform in 1997.

Goh stood tall at the awards-ceremony in Kuala Lumpur last month as among the others honoured with him were veteran Australian referee Ben Williams, the first Australian match official to officiate a FIFA World Cup, during Brazil 2014. Some of the achievements of the 2013 AFC Referee of Year included refereeing in the A-League, Asian Games, AFC Champions League and AFC Cup.

How, why, what, when, where the FAS missed saluting Goh’s retiring achievement in getting the AFC Referees Memento Award is simply beyond me. Many referees, past and present, I spoke to were equally shocked at the FAS silence. They, too, were humbled and humiliated.

Former Chairman of the FAS Referees Committee (FASRC), lawyer Jeffrey Beh, who is recognised as the best referee boss ever, says: “Referees make tremendous sacrifices in all manner just for their passion and love of their role in promoting the good of the game. The reward to them for their sacrifice is minuscule.

“It is a rare occasion when a referee is honoured by AFC or FIFA. I salute Jeffrey Goh, a very hardworking referee. FAS should publicise the achievements a great way to attract young talents to the vocation.”

FIFA Referee Instructor John Chia, who was Goh’s international team-mate on many occasions, praises: “Despite having been to the game pinnacle, Jeffrey has remained humble and always level-headed on the ground. While still active, he has been a role model and a mentor to many young referees. We look forward to his contribution in the field of referee education in due course.”

Peer review is really the pillar of sporting communication, says former FIFA referee Murugiah Maniam, as FAS relies on these men-in-black volunteers, week in and out, for the professional and amateur matches.

“Some of them have consistently done outstanding work, like Jeffrey Goh, to reach the highest levels of World Cup refereeing. He really needs to be recognised,” says Maniam, a former FASRC Deputy Chairman. “FAS must show absolute respect, especially for retiring top-class referees.

“They are the unsung heroes of football and having these international awards from the AFC will help tell the positive stories to the younger generation. It will also reward them for their diligent work up and down Singapore football fields on a daily or weekly basis and attract more men and women to become referees.”

“I’m very disappointed he has not been adequately lauded for his world-class achievements. One important way of encouraging volunteers to remain with your organisation is to give then adequate recognition,” he says.

“Recognition to be effective should be consistent and ongoing. Mind you, volunteers can quickly loose motivation if they feel that their work is not valued.”

FIFA Referees Committee member Subkhiddin Mohd Salleh from Parit Buntar, Malaysia, saluted Goh’s “world-class refereeing skills”. He adds: “He’s very smart guy when doing his job with his flag. He’s a world-class role-model, in my view, and he always inspires me with confidence to concentrate and enjoy the big matches. I always admire him and feel very comfortable in being able to rise to the big occasions with his support. That’s Jeffrey Goh, my brother.”

Goh has been described as a “true professional who won’t hesitate to share his experience both on and off the field of play”, according to former FIFA referee Ganesan Maniam, now a FIFA Fitness Instructor. He adds: “We need more of such high-class calibre in our existing list of FAS referees, who will never compromise on professionalism, when they hold a whistle or flag.”

When asked if he was demoralised at the non-FAS recognition of his AFC Award, Goh, just smiled, and says: “Suresh, dreams do come true if you work hard in life. I’ve always just kept believing in myself and now leave active refereeing, holding my head high as an AFC Referees Memento Award recipient.” He declined further comment.

For the record, I can confirm I have formally written to FAS headquarters for a simple explanation why the football and refereeing fraternity were kept in the dark on Goh, the only Singaporean to be decorated by the AFC on January 19.

The prolonged awful silence just sounds like a death-like sentence, in my view, and the strange censorship of his AFC Award is just baffling.

Getting a positive response from the FASRD or FAS Referees Committee (FASRC) is like clutching at straws. Speaking to the refereeing fraternity, the men-in-black will swear that those managing refereeing affairs now selfishly put themselves first, in looking for overseas appointments, rather than sincerely nurturing the development and welfare of the younger referees.

Nothing surprising to me since the top FAS management does likewise, holding high office just to capitalise on the gratis overseas trips from FIFA and AFC rather than seriously promoting the No 1 sport among the grassroots clubs.

Yes, the mysterious dumbness at FAS headquarters will continue for a few more weeks before the democratically-elected elections are held. And I eagerly look for an overwhelming change in refereeing leadership so that the men-in-black are properly recognised for their voluntary contributions, with a humble whistle or flag.

Gentlemen referees of world-class status like Jeffrey Goh deserve more bouquets and trumpets to blow his AFC Award instead of a deadly silence from the FAS, which I regretfully interpret as a mystifying slap on the face.

* Suresh Nair is a Singapore-based journalist who has been involved in refereeing for more than three decades as a Class One referee and England-trained & AFC referee instructor. He continues to assess the men-in-black in the 2017 S-League season.