The book looks at the WP through Mr Yee’s eyes and aims to provide readers with a better understanding of the nature of work of opposition politicians in Singapore.

The memoir will cover the 55-year-old Mr Yee’s life before he joined the WP, his reasons for joining the opposition, his three contests in the general elections from 2011–2020 as well as his parliamentary work and other political activities. It includes his thoughts on the shape of Singapore’s politics moving forward.

Mr Yee, who was Non-Constituency MP from 2011 to 2015, released the sleeve design of his book on social media on Friday (Nov 27). It shows that Prof Singh and Mr Teo were among those who have read and recommend the book even though it is by an opposition politician.

Prof Singh was an MP in Prime Minister Lee Hsien Loong’s Ang Mo Kio GRC for nearly two decades — from 1996 to 2015. He stepped down from politics ahead of this year’s General Election but was PM Lee’s election agent.

Prof Singh has been praised over the years for his outspoken and critical views on a number of issues and for speaking out against the authorities when he feels conflicted about an issue. He has also not shied away from associating with members of alternative parties.

In his endorsement of the book, Prof Singh acknowledged the challenges opposition politicians face and commented that being critical of policies is not equivalent to being disloyal to Singapore. He wrote:

“The battles opposition MPs and members have to face against the formidable PAP are tremendous. I am glad Jenn Jong has written his Journey In Blue capturing the trials and tribulations of being in the opposition in Singapore. As he wrote, his ultimate loyalty is to Singapore and speaking against policies is not being disloyal.”

Mr Teo also shared kind words about Mr Yee’s book. The former PAP MP was elected in 2006. He served as Pasir Ris-Punggol MP, in Senior Minister Teo Chee Hean’s team, from 2006 until this year, when he retired from politics.

He said: “An interesting and insightful read about JJ’s political journey. Everyone’s perspective is different and there is much to learn from one another. JJ’s book provided that learning opportunity, not only with his views, but also how he felt at different stages of his journey.”

Another personality who has endorsed the book is former Permanent Secretary (Education and Community Development) Er Kwong Wah. He said: “Journey In Blue is an interesting reflection of an entrepreneur-turned-politician. Jenn Jong’s views are personal and sincere, and give the readers a rare peak into the Workers’ Party of Singapore.”

In his endorsement, WP chief and Leader of the Opposition Pritam Singh said that the book provides an interesting glimpse into the inner workings of the party:

“JJ’s reflections in this easily digestible book provide some insights into the workings of the WP. Much work goes on behind the scenes and readers will find this book useful for perspectives that the mainstream and online media sources have not authoritatively or incompletely captured over the years.”

The final review came from former Nominated MP (2012-2014) Faizah Jamal, who was  in Parliament at the same time as Mr Yee. The academic said:

“Journey In Blue provides not just a rare insight into an MP’s experiences in the highest law-making body of the land; it is a searingly honest account of the challenges and obstacles faced by a politician from an alternative party not many Singaporeans are privy to, in a country, which until only recently, is not used to the value of diverse voices in Parliament.” 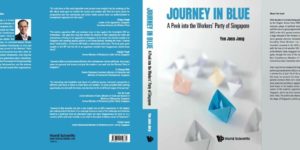 The 316-page book will retail for S$28. Although it is expected to hit bookstores sometime in mid-December, Mr Yee intends to sell some of the copies he has as part of a pre-launch sale. Those who are interested are invited to make an order on his website. Limited pre-launch copies are available. /TISG