Singapore — “I want to invite everyone, especially BB residents, to sign this petition that Jimmy Tan initiated. I also urge Mr Murali (Pillai) to do the same for BB residents’ sake,”  says Dr Chee Soon Juan about a petition to conserve Bukit Batok Hillside Park.

In a Facebook post on Thursday (Nov 26), the Secretary-General of the opposition Singapore Democratic Party, said: “Several weeks ago, a BB resident, Mr Jimmy Tan, brought to my attention an issue that would have a profound impact on Bukit Batok and the rest of S’pore. It has to do with the clearing of the BB Hillside Park for development.”

Dr Chee raised three reasons against any clearing of the forest.

The first reason was health. He said: “More development means more people and more foreigners. This will add to an already stressful environment that worsens our mental health. Study after study show that improvement in health and lower mortality risk is proportionate to the amount of open green spaces. Also, people wedged in crowded estates have fewer friends, poorer community involvement, and less frequent contact with their neighbours than people who live in more spaced out environments.”

The second reason was that, by clearing the forest, the beauty of nature would be gone, and “in its place would be more concrete and HD blocks and car parks”.

The third reason cited by Dr Chee was that forests and greenery help to improve the quality of air and reduce temperatures. He said: “Higher temperatures lead to greater usage of air-conditioning adding to the climate crisis. With the development of Tengah and potential clearing of BB Hillside Park, the BB’s surface temperatures are set to rise.”

He urged Bukit Batok residents and Member of Parliament Murali Pillai, of the People’s Action Party, to sign the following petition, which was started by Mr Tan. 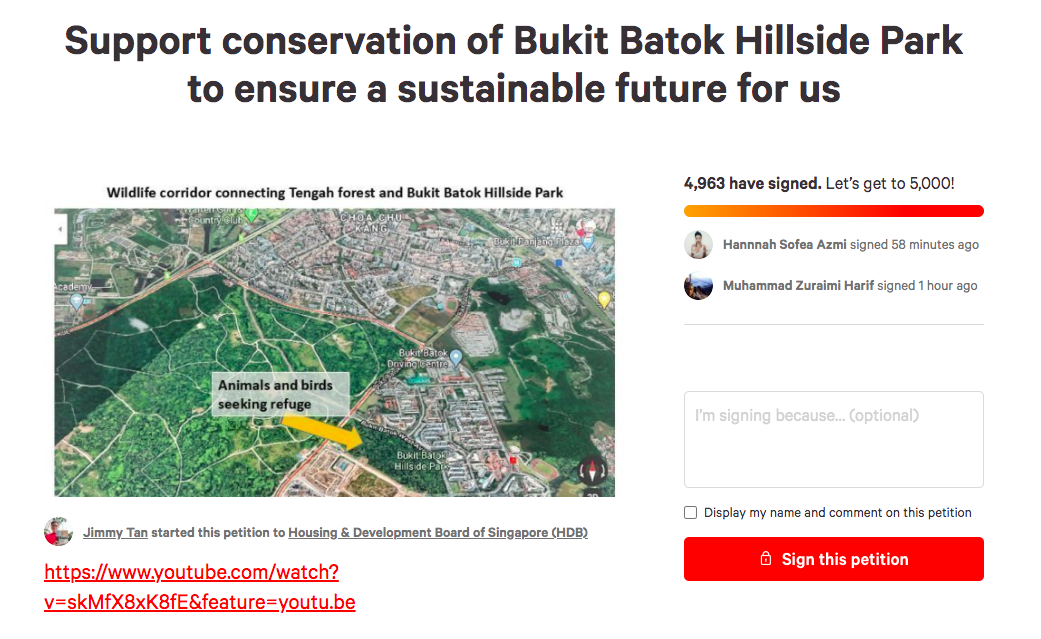 The petition is to help:

The petition was started three months ago and almost 6,000 people have signed it. /TISGFollow us on Social Media