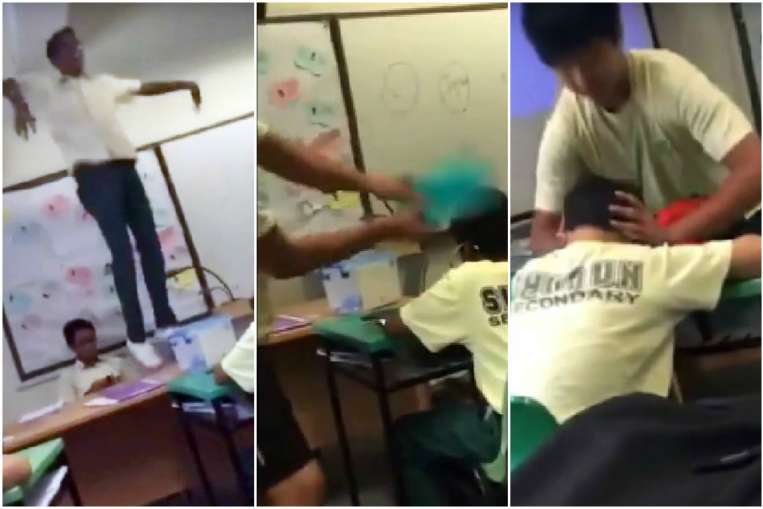 In September of last year, this video of a bullying incident in Shuqun Secondary School surfaced and soon went viral.
[fvplayer src=”http://youtube.com/watch?v=ffxRnKVIXsI”]
The Middle Ground (TMG), an online publication exclusively covered the story by interviewing the mother of the bullied student and the victim himself. TMG had claimed in its report that the the class teacher knew about the bullying that was going on in her class 5-months prior, but that little was done to address the problem.
The mainstream media carried TMG’s exclusive report and it had a much wider reach.
Mr Chia Hai Siang, the principal of the secondary school then, had not earlier responded actively to such adverse reports but has now spoken up. He said that only a “single complaint was made to the school, and the teacher involved had done the correct thing by warning the aggressor”. The principal claims that the teacher “was not aware that the bullying resumed a few days later”.
Mr Chia who left the education service as at the end of last year to pursue further studies, said in his Facebook post that he had refuted false allegations earlier because he “did not want to feed the ongoing media frenzy” and also because he did not want his comments to fuel “irresponsible articles” go viral.
Although Mr Chia did not specifically name any publication for producing “sensationalised headlines that gave a wrong impression of the facts”, he wrote about one with the tagline “moderate speech and agreeable disagreement”, (which is clearly TMG’s) and took TMG to task for “deliberate and irresponsible” reporting.
He accused TMG of choosing not to emphasise the fact the the mother of the victim appreciated the work that the school had done with her child and for suppressing the fact that “a full weekend separated the incident from the time it was posted on the Internet, during which neither victim mentioned anything to the school nor their parents”.
The principal has clarified that the video was not posted by any of the school’s students, but by a school-leaver from another school who posted it on a gaming site at 9 a.m. and on a school day.
Mr Chia revealed that 2 weeks after making a police report on the bullying incident, the mother of the victim had on her own withdrawn the report because she felt that it was a mistake because the school had handled the incident well.
He also said that both victims had written to him that they felt sorry for their friend and hoped to see everyone move on.
Mr Chia took further digs at the reports, “that after one or two meetings with one of the victims in question, the journalist somehow understood and COULD SPEAK FOR the boy’s psychological state, better than the school”.
The biased reports had feed extreme vitriol against the bully (where some had threatened bodily harm to the student) and the school itself, said Mr Chia.
TMG responded to Mr Chia’s post by reminding him that they had tried to get his side of the story several times, but to no avail. Thanking commenters for the vote of confidence, TMG said that it stands by the veracity and fairness of their reporting on the incident.
Bertha Henson the editor-in-chief of TMG defended the report on the publication and said:
“NOW he talks….three months later. After a deafening silence, a deadening rant. As always, shoot the messenger, after declining to talk to them. And messengers must always deliver “good news” to be considered “responsible””.
—
Mr Chia’s post in full: