Defending our youths from Mahbubani’s paranoia 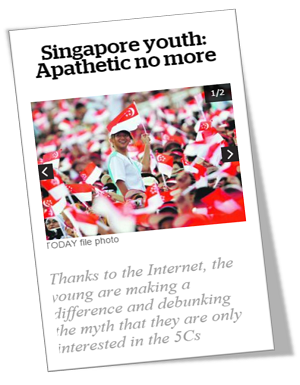 By: Andrew Loh
“Many young Singaporeans are too wrapped up in their own interests and careers to play or even consider active roles in society and country,” said Bangkok-based The Nation newspaper in March 2001.
The report, titled “PM Goh scolds self-centred youths”, quoted how the then Singapore prime minister chided its younger members for being apathetic, a result of the youths never having known “a hostile environment.”
“They have thus never had to consider seriously how their society could be improved so that their own lives could be better,” said Mr Goh, who remains as Emeritus Senior Minister in the present government.
Indeed, the perceived lack of idealism among our youths has been a recurring concern of the government for a long time.
Three years after Mr Goh’s remarks, it was Prime Minister Lee Hsien Loong’s turn to exhort the youths to get involved.
In his maiden National Day Rally speech in August 2004, Mr Lee said:

“I read that some people are asking, now that you want young people to get engaged, what is the Government going to do to get young people engaged?  Actually, we are going to wait.  No, get up, do it.  Nike says, “Just Do It”.  Engage your ideals, your ideas, your energies, build a new generation, build tomorrow’s Singapore.  Don’t wait or depend on the Government.  Find your own leaders, organise your own solutions, move.”

And a year later, then Education Minister Tharman Shanmugaratnam raised the issue again – but this time with more accommodating words.
Advising students not to feel discouraged if their effort to change things does not initially bear fruit, Mr Tharman said he welcomed “restlessness in young people as it feeds idealism and helps society move forward.” (Seehere.)
And through the years, the government has introduced various ways to get youths to be pro-active in doing their part for society – through the community service programme in the schools, to the establishment of the new volunteer youth corp last year, for example.
PM Lee, who was at the inauguration of the youth corp, said, “We want to encourage more young people to build a better world, and a better Singapore. You are our future, you’re idealistic, full of energy and passion. Go forth, change Singapore, change the world, for the better.”
So, what is the result of all these effort?
If you read what Kishore Mahbubani, the dean of the Lee Kuan Yew School of Public Policy (LKYSPP), wrote in the Straits Times a week ago, you may think that the effort has been futile.
How did the dean come to such a conclusion that there is a “deficit” of idealism among our youths?

Mr Mahbubani said he had met 21-year old Boyan Slat, the Dutch youth “who has made it his life’s mission to rid the oceans of plastic”, last month.
Slat had also expressed interest in helping to clean up the Straits of Malacca, and had asked Mr Mahbubani, who had served as an ambassador for Singapore, to assist in this.
Mr Mahbubani, in his article, said Slat’s request made him question why it was a 21-year old Dutchman who is worried about the pollution in the Straits of Malacca, and not “Singaporean teenagers worrying about the dirty and polluted waters around Singapore.”
The former ambassador concluded that the reason was “a painful truth for us” –  that “there is a deficit of idealism among Singapore’s youth.”
Is Mr Mahbubani right? Is apathy, or lack of idealism, still prevalent among our youths? Have our youths not become more idealistic or more willing to contribute to society since PM Goh scolded them in 2001?
Has nothing really changed in the last 15 years, despite all the effort by various parties to get youths to, in the words of Nike, “just do it”?
Fortunately, the answer seems to be no, things have changed, and idealism among our youths has become more pronounced. And while there are no actual statistics which we can cite for a conclusive determination of the level of idealism among our people, there are proxy indicators which are nonetheless informative and instructive.
One of these is the rate of volunteerism.
According to the National Volunteer & Philanthropy Centre (NVPC), the numbers have increased significantly through the years.
In 2000, the volunteer rate among Singaporeans was a mere 9.3%.
In 2002, it was 14.9%.
By 2010, it had gone up to 23.3%.
And two years later, in 2012, it was 32.3%.
As for youth volunteerism, the NVPC said, “Volunteerism among youths aged 15-24 saw the largest increase.”
“Youths in Singapore are volunteering more. 43% and 28% of youths aged 15-24 and 25-34 volunteered in 2012 respectively, up from 36% and 21% in 2010. Informal volunteering was cited as the major reason for the increase.”
In 2013, the NVPC said almost eight in 10 registered volunteers on SG Cares (www.sgcares.org), which matches individuals with volunteering opportunities of their choice, are aged between 15 and 35. (Source:TODAY.)
“Of the 32,774 volunteers registered on the website, almost 80 per cent, or 25,756 of them are youths — a 16-fold increase from the 1,599 youths registered in 2009,” TODAY reported.
So, we can perhaps conclude that youths are indeed getting involved – and the advent of the Internet could have a lot to do with it.
“Thanks to the Internet, the young are making a difference and debunking the myth that they are only interested in the 5Cs,” said a TODAY report in August 2013.
And what are they involved in? The causes they champion are varied, of course, and there are numerous examples of these, which have been featured by the media from time to time.

The TODAY report featured 10 of them – including 25-year old Jeremy Chua who “started a Facebook page calling for people to donate their excess masks and mobilised hundreds of volunteers to distribute masks to the needy” when the haze hit Singapore a couple of years ago.
There is Youth for Ecology — a group of youths who were stirred into action by the debate over the White Paper on Population – led by two 19-year olds; and Youth Without Borders, set out to complete 50 social projects by 2015, initiated by co-founders Joseph Tay and Kenneth Yong, both 24.
There is also photographer Bernice Wong, 24, who “has been documenting the lives of Bangladeshi workers here through a website since last year, to debunk the stereotypes and anti-foreigner sentiments.”
Kwok Jia Chuan and consultant Jeremy Au were both 25 and are “the proud co-founders of Conjunct Consulting, which is touted as Asia’s first pro-bono consulting firm for non-profit organisations and social enterprises.”

After Typhoon Haiyan hit in the Philippines in 2013, humanitarian agency Mercy Relief said nearly 100 youths and students stepped forth to spearhead fund-raisers for the typhoon victims.
It added that 60 per cent of its volunteers are youth and students, TODAYreported then.
And in 2014, some 550 youths and guests were present at the Spirit of Youth Awards, “an annual ceremony which recognises the admirable contributions of nEbO youths the past year.”
nEbO refers to the youth community of the Labour Movement.
“More than 100 events were organised over the past year, with about half of the events conceptualised and carried out by nEbO youths themselves,” its website says.
The website also reports that one of the awards recipients was the team which had “organised a hugely successful nEbO W.I.S.H in 2013 where they collected some 10,000 food ration units from seven NTUC FairPrice outlets island-wide and mobilising 160 youth volunteers.”
And if you need more examples of youths doing their part, just this past week alone there were reports of several initiatives by youths and young adults.

One of these is My Father Tongue, which is spearheaded by three students from Nanyang Technological University, to promote the use of dialects in Singapore.
In 2013, there was a similar initiative by 19-year old Jasmine Tan; along with others such as then 19-year old Jeraldine Phneah and 18-year old Mah Poh Ee. [Pictured, right]
There is the other group of students from the NTU who formed Join The Current, a campaign to spur awareness of current affairs in 10 to 14-year olds in Singapore.


And most recently, the We Are Majulah initiative which strives to bond Singaporeans.
Finally, there is the cause-based group called Second Chances, powered by three youths championing the abolition of the death penalty here, which it has been doing so for several years now.

A letter to the Straits Times on 24 February by Ho Xian Tang provided more examples of youths involved in trying to change things: the Love Our MacRitchie Forest movement, and the People’s Movement to Stop Haze.
“Other areas, such as the arts and humanitarian issues, are also filled with young people with ideals,” Mr Ho said. “Their story may not be known to people outside their community, but that does not mean they do not exist.”


“There is a growing wave of empathy for the community, a growing sense that all of us have the ability to act and the capability to make a difference,” Mr Au told TODAY. He attributes this “in no small part to the digital revolution, which has allowed problems faced by some in Singapore to surface quickly.”
So, what can we say from all this?
It is clear that the youths of today are not apathetic or lack idealism. It is, in fact, ridiculous to conclude from one example – that no youths have expressed concerns over the pollution in the Straits of Malacca (incidentally, has any adult expressed concerns about it?) – that Singapore’s youths lack that streak of idealism.
The facts point to the contrary, and that our youths’ interests span a spectrum indeed – and more than that, they are stepping up and putting their beliefs into action.
So, instead of lamenting and decrying their alleged lack of idealism, an unsubstantiated claim by Mahbubani, it would be better to recognise those who are already out there doing things for society, and to encourage more to do the same.
Don’t unfairly broadbrush a whole generation by one simplistic example.
As Lee Chee Kong of TODAY wrote in 2013, referring first to the advent of the Internet, “Perhaps the Singapore youth has all along been waiting for the right tool. Now that it has arrived, it is time to lay to rest the ghost of the Apathetic Singapore Youth, we’d say.”
Indeed, the facts themselves rebut Mahbubani’s misplaced criticism.
—
Republished with permission from Andrew Loh’s blog. Andrew’s FB.Follow us on Social Media