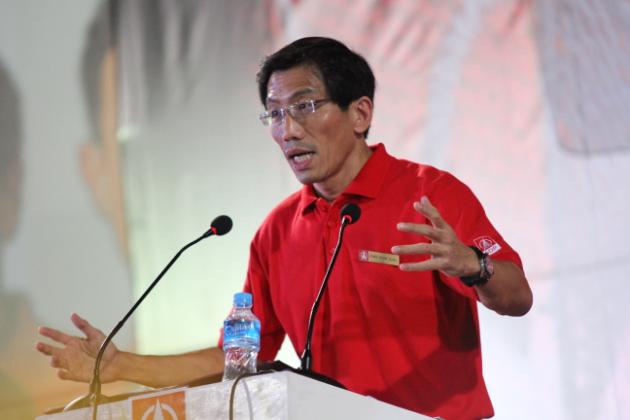 The Opinion Collaborative (TOCL) on 10 March 2016, organised a fireside chat with the secretary-general of the Singapore Democratic Party (SDP), Dr Chee Soon Juan. The conversation was moderated by The Independent Singapore’s Alfred Dodwell.
In the conversation, touching on the topic of the Elected Presidency – if there is a need to ensure that the Elected President is a minority – Dr Chee said that the People’s Action Party (PAP) has to trust voters more. He referenced a recent article to drive home that point that Singaporeans do not vote along racial lines.
[fvplayer src=”http://youtube.com/watch?v=SXkaVWVJYhg”]
Dr Chee made the same points again when he spoke to the media at his walkbaout in Bukit Batok single member constituency (smc) yesterday (22 Mar). Claiming that the issue of unelectability of minority candidates is a ploy the PAP uses to entrench its continued dominance in the country, Dr Chee dismissed any talk of race being a factor in the upcoming by-election in the smc.
Referencing the Workers’ Party’s JB Jeyaretnam’s victory in the 1981 Anson by-election, Dr Chee asked, “you mean the majority of people in Anson in 1981 were Indians?”
“It’s an excuse that the PAP had to come up with in order to justify GRCs, so that they can put in all these first-time candidates, field them together with the heavyweights, and then bring up the numbers in Parliament,” he added.
Saying that he does not view the PAP’s candidate in the election, Mr Murali Pillai, as being any less formidable an opponent as any Chinese candidate, Dr Chee asked the PAP to move away from such race-based conversations.
“The more the PAP talks about race, the more sensitised Singaporeans are to this whole thing, this racial divide,” Dr Chee remarked.
He further emphasised, “my contest with him will not be based on the fact that he’s Indian and I’m Chinese. I will contest him as a PAP candidate and a Singaporean who means well for our country, just as we do.”
Mr Pillai was unveiled as the PAP candidate for the Bukit Batok by-election on 21 March 2016 by the Deputy Prime Minister, Mr Tharman Shanmugaratnam. he is the second minority candidate being fielded by the PAP in a smc. The first was Michael Palmer in Punggol East smc in the 2011 General Election.Follow us on Social Media