Changing camps, M’sia Islamic party PAS now supporting the PM claiming there is a plot to overthrow him 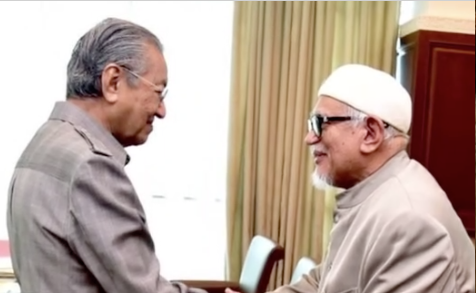 In a peculiar turn of events, PAS, Malaysia’s Islamist party, came out to support Prime Minister Tun Dr Mahathir Mohamad, an archenemy, claiming there is an attempt to overthrow the elderly statesman.

PAS, which is in the opposition and contributed to the defeat of the Pakatan Harapan party in the Cameron Highlands by-election last month, now claims it is a supporter of Dr Mahathir.

While no official disclosures were made after a private meeting between PAS leaders and Dr Mahathir, it is now clear the PAS wanted to ‘warn Dr Mahathir’ of a plot by Pakatan component parties to remove him as PM.

PAS said “something is brewing” within the coalition, and suggested Dr Mahathir had said there is an attempt to remove him as PM in the form of a ‘betrayal’ by other PH component parties.

Which are the parties the PAS is referring to? PAS secretary general Takiyudin Hassan told a press conference his party will support Dr Mahathir in a vote of no confidence.

Based on the Parliamentary procedures in Malaysia, there is no such vote on the horizon, unless PAS is aware of what Pakatan Haparan component parties are plotting?

According to the Malaysia Chronicle, Dr Mahathir’s ‘Game of Thrones‘ is now almost complete.

The portal says Dr Mahathir is planning to boost the Bersatu party by taking in leap-frogging UMNO MP’s. The Bersatu last week admitted seven Umno MP’s within its ranks, saying they were vetted, and they pledged to support the new government’s reform agenda.

However, the portal adds the plan is to make the Bersatu the biggest Malay based party within the Pakatan coalition, thus undermining both the PKR and the DAP.

The meeting between PAS and the Prime Minister held at the Al-Bukhari foundation in Kuala Lumpur – away from the prying eyes of the Pakatan Harapan government – was not kept secret by Dr Mahathir.

The PM instead made some interesting claims regarding PAS, saying the PAS leader Abdul Hadi Awang promised to support the Bersatu candidate in the hotly contested Semenyih by-election.

Dr Mahathir also revealed PAS wants representation in various bodies and local planning, adding that they (PAS) only said they would not support Umno in this (Semenyih) by-election, because Umno was not fighting against Democratic Action Party.

The Malaysian PM and PAS have a long history of enmity, particularly during the time PAS was headed by Nik Aziz Nik Mat the religious leader who was the Menteri Besar of Kelantan.
While Nik Aziz was friendly with Anwar Ibrahim and the DAP, he was staunchly against Umno, advising PAS never to work in an alliance with the former party of Dr Mahathir.