Local Redditors have blasted an inane netizen who flamed an NSman for chilling at a McDonalds outlet, thereby, “giving opportunity to would be terrorists and enemies to disturb our nation.”

The netizen, whose name was censored in the original Reddit post, shared a photo she had surreptitiously taken of a soldier in uniform, looking at something on his phone as he consumes his McDonalds meal. The picture was apparently taken at the McDonalds outlet at the Lot One Shoppers’ Mall at Choa Chu Kang.

Sharing the picture to a Facebook group, the netizen wrote: “Wow, army boy now so good life is it? 10am still can sit at Macdonalds [sic] relaxing watching movie on his phone or playing games instead of going back to camp to work and/or to train? Looks like he is from the airbase.

“I wonder if MINDEF really reduce their training tempo till this stage? Like this how to trust our army boys to defend our country? Not only he expose himself to the public by giving opportunity to would be terrorists or enemies to disturb our nation, it will also create an image that our defence organisation is too slack. Hope MINDEF look into this.”

Several netizens on Reddit blasted the netizen for trying to shame a soldier who was minding his own business and for sharing a picture that clearly shows his face and name on social media. The Independent has censored the picture to protect the identity of the NSman.

Some Redditors pointed out that the netizen who posted the picture is a known troll who always take pictures of individuals in uniform and complains about them online:

Others excoriated the netizen for her inane views and for trying to shame others instead of minding her own business: 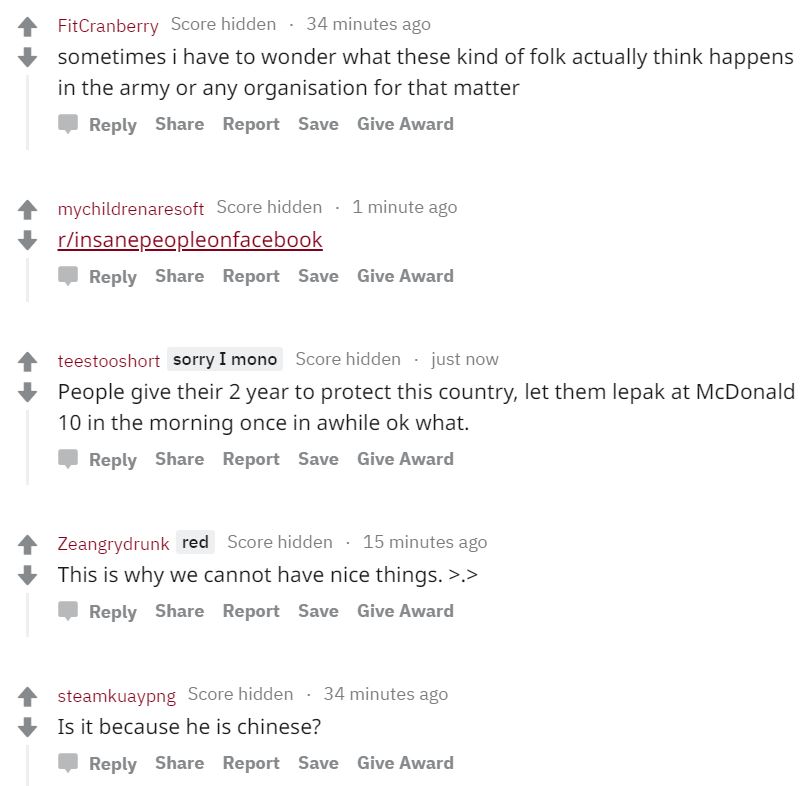