Cheng added that along with PM Lee’s donation, both he and his father the late Mr Lee Kuan Yew “have donated millions over the years quietly”.

In a now-deleted Facebook post, former Nominated Member of Parliament Calvin Cheng questioned why Prime Minister Lee Hsien Loong did not get the same recognition Pritam Singh did for donating his salary increase.

In his Facebook post on Tuesday (Jul 28), Mr Cheng wrote: “In 2007, when PM Lee Hsien Loong had a salary increase, he announced that he would donate 100% of the increase to charities and the disadvantaged”. 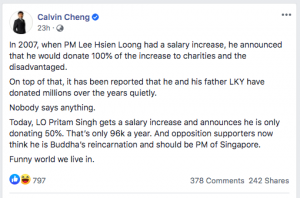 He added that along with PM Lee’s donation, both he and his father the late Mr Lee Kuan Yew “have donated millions over the years quietly”.

“Nobody says anything”, Mr Cheng mused.

“And opposition supporters now think he is Buddha’s reincarnation and should be PM of Singapore.

Funny world we live in”, he added. /TISG

Read related: Pritam Singh to donate half of his Leader of the Opposition salary