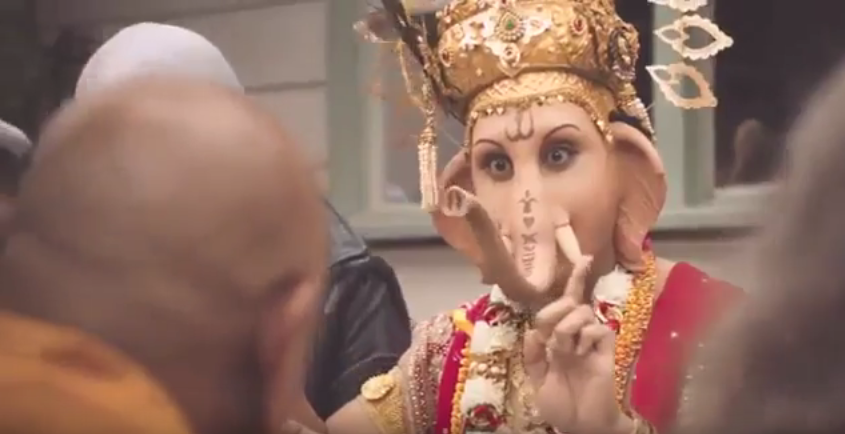 In its latest advertisement for lamb, Meat and Livestock Australia (MLA) decided to try something unusual and unexpected.  The campaign “You never lamb alone” has a premise that seeks inclusivity by showing gods, prophets and messiahs of different faiths and beliefs sharing a meal.

We have Jesus, Moses, Aphrodite, Buddha, Ganesha, Zeus, Obi Wan Kenobi, and Ron Hubbard, the man who started Scientology sitting together. Mohammed doesn’t show up, calling to say that he can’t be present because he needs to pick up a child from day-care.

Everyone else settles down around a plate feasting on lamb as the host comments, “It’s a nightmare catering for you lot with your dietary requirements.” It features friendly chitchat between the guests. Moses, for example, steps up when Hubbard starts talking about his religion and pitching it. He tells him, “Let’s not get into religion at the table.”

The host is also shown to be an atheist that prompts Ganesha to comment, “We really need a better marketing team.”

This video has led to a major furore of sorts.  Many Hindus have taken offense to the ad showing Lord Ganesha consuming meat and India has lodged a diplomatic protest with Australia.  On Friday, the Indian High Commission in Canberra said that it had issued a “demarche” to three Australian government departments.

Australia’s Advertising Standards Bureau revealed that more than 30 complaints have been received so far over the advertisement relating to “a number of faiths”.  Additionally, an online campaign to call for a ban of the commercial has gotten thousands of signatures.

“Beliefs change over time. God is portrayed the way society thinks,” said Siddhi Deshpande, a professor of Ancient Indian culture at St. Xavier’s College, Mumbai.  She explained that Indian mythology actually depicts the Gods as Kshatriyas, implying that this group participated in animal sacrifice and consumption of meat was not unheard of. Ancient texts may have reflected the society’s beliefs during those times, according to Deshpande.

Youngsters in India share differing views on the matter. Gautam Ravichandran, a sales professional, thinks that the brand shouldn’t have ventured into tricky territory. “How much ever a bohemian one might be, talking to an audience requires understanding their sensibilities in the first place,” he said.

The ad is currently not available on YouTube in India and seems to have been pulled down from the site after the controversy.

Meanwhile, the Indian High Commission in Canberra said  in a statement that the ad should be removed because many people considered it “offensive and hurting their religious sentiments”.

A student at Tata Institute of Social Sciences, Abha Joshi has a different perspective, saying that it’s problematic to homogenise something like eating habits of all Hindus. She said that many Hindus from marginalized castes do consume meat.  “It is important to note that the marginal ‘upper caste’ Hindu population is offended,” she said.  A writer, Prakruti Maniar had something similar to add. “I’m speaking as a Hindu and I think that’s important in this case – I don’t think it is offensive simply because offense as a term is so controversial. If I’m sentimental about something, that’s my problem. Why would I force anybody else to think according to me?”

Selective outrage is scattered across this debate with people sharing absolutely differing views, bringing their personal experiences, conditioning and eating habits into perspective. There isn’t one simple answer that fits all, hinting that there’s more it to than meets the eye.

A tiny community of Lord Ganesha devotees in Koppal district, Karnataka offer meat and alcohol to the God every year during the Ganesh Chaturthi festival. This sub-sect of the Kshatriya community wants to leave no stone unturned as they believe that this offering will please their deity and bring them abundant wealth and happiness. They include liquor, chicken as gifts and in a particular case, even lamb and fish. This practice significantly differs from the norm.

BJP legislator from the Maharashtra Legislative Assembly, Yogesh Sagar, opined that there’s no point in encouraging religious controversies like this one by raising a hue and cry about them. “It’ll only spread if they do. There’s no end to this,” he said.  A BJP corporator, Dr. Ram Barot disagrees. “It (the advertisement) is a wrong thing because a majority of Hindus are vegetarian and they will be hurt by this ad. This ad shouldn’t be presented,” he said, adding that even if the ancient texts depict otherwise, a majority of Hindus cannot fathom their Gods eating meat and a representation like that severely hurts their sentiments.

Essentially, the way we imagine Gods in our heads and our perspective changes over time, making it difficult to stick to one particular ideology at a time. Walking on rocky terrain like this one requires a lot of thought, research and caution. Tread softly, if you must because you don’t know what you’ll find on the other side.