The Independent Singapore News
Lifestyle At odds over street art

At odds over street art 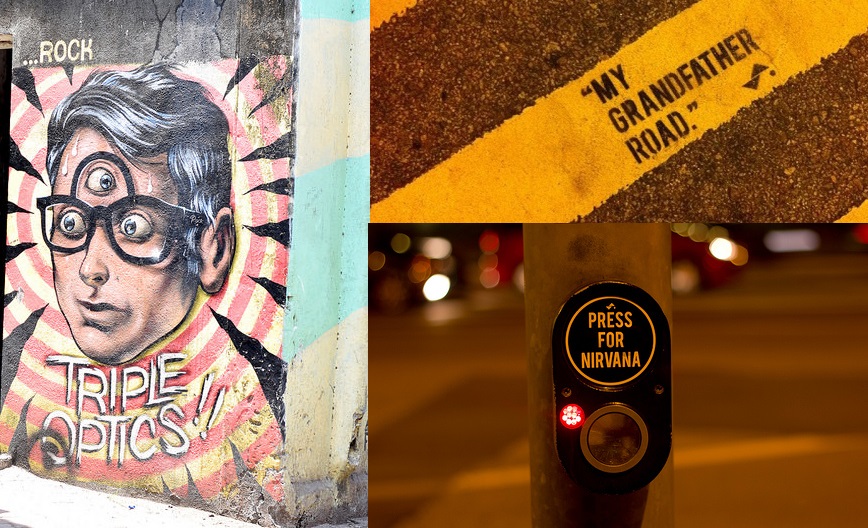 In Delhi’s Shahpur Jat area, I stopped frequently on a personal walking tour more than two years ago. There was so much to see: a boy smiling at me, a lady in a red saree with a haunting gaze and a trapped man looking for a way out.

The eccentric colony in the Indian capital is known for its hidden cafes, indie boutiques and lots of street art in unexpected places. Street art’s power lies in its accessibility and individuality. It’s open to every kind of man and woman, it doesn’t require you to walk into a gallery and be a connoisseur or a nervous visitor with high-strung opinions. It can simply hold your gaze on your daily commute, greeting you as you walk past it on a regular day.

India has witnessed a booming street art scene over several years. A massive community, St+art India Foundation works with artists to help them paint their town red with generous splashes of creativity. It is hard work and a huge crew of five co-founders, street artists and volunteers work tirelessly in different cities. They’ve covered Bangalore, Delhi and Mumbai in the past and are gearing up for a new festival in Mumbai from October this year.

Meanwhile, in Singapore, Samantha Lo is recognized by many as the graffiti artist who took the city by storm. Called the “Sticker Lady”, Lo has an online arts magazine to her credit plus an array of Singlish messages scattered across Singapore. Her unique messages at traffic stops offered gems like “Press to Time Travel” and even better, “Press to Stop Time”.

There was social commentary too. A message on a sidewalk warned passers-by. “Stop looking at your cellphone,” it read in large letters.  This initiative didn’t go down well with some. Lo was arrested in 2013 for vandalism, leading to many supporters signing a petition online. They asked for leniency on her sentencing. Eventually, eight charges were dropped and Lo pleaded guilty on seven counts of mischief. She was told to complete 240 hours of community service.

Art essentially never dies without a fight. It rages on and on against the dying light, fierce and stubborn. Lo didn’t give up on her love for art. She set about to get her work featured legally on Sentosa’s Siloso beach for a project called “Signs on the Loose.” She also had a National Day installation called “Lepak Corner” at Beach Plaza in 2013.

The possibilities that come with encouraging street art are endless. It lights up a dull space, encourages freedom of expression and creativity and makes walking in the city a rich experience filled with hidden details and powerful commentary. It also helps rehabilitation and healing. For example, an organization called Delhi Street Art works with children from a homeless shelter in Delhi called Khushi Rainbow Home. The girls are coached by popular street artists and encouraged to express themselves. After receiving instructions from their mentors, they redo a private or public space with beautiful art, forgetting their abusive pasts and painful memories for a little while. They emerge feeling stronger and much more confident from this experience that’s free from judgement of any kind.

Local street artists in Singapore are spotting ways to encourage creativity on the streets. For instance, art group Band of Doodlers seeks permission from public agencies and draws on walls once they get the green signal. Commissioned work in a public space makes it possible for artists to showcase their talent without having to fret over galleries. Singapore Street Festival’s 2017 edition had an Urban Street Art showcase that featured live painting by masters of the craft. On the flip side, unsanctioned graffiti is quickly spotted and wiped out in the city and difficulties still exist.

Street art can add character to a city like nothing else can. It has the power to transform a neighborhood, bring a place to life and change society with subtle yet strong imagery. A quirky work of art can even put a smile on a tired face and reveal a city’s countless stories, its history and the hopes and dreams of its people.Follow us on Social Media