Airline staff misbehaves with passenger, manhandle him at Delhi airport 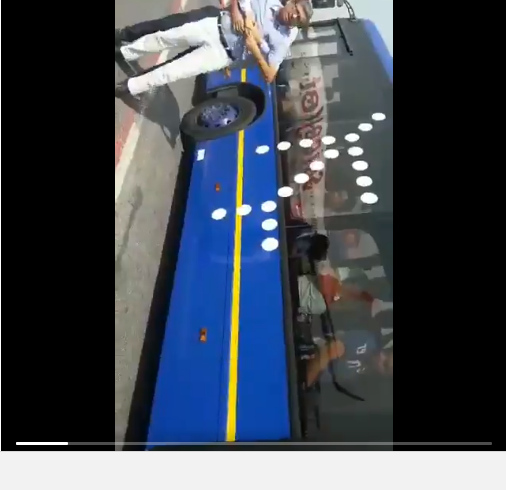 India’s budget airline, IndiGo has been heavily criticised after a shocking video surfaced online on Monday. It showed the airline’s staff engaged in a brawl with a passenger on the Delhi airport tarmac.  The footage has attracted angry and sarcastic responses from people on social media.

Indigo has a clear and efficient division of labour.
Their air crew takes passenger up in the air.
Their ground staff takes passengers down to the ground.

Two IndiGo staff members were seen fighting the passenger, pinning him to the ground after a quarrel. The passenger – who was identified as Rajiv Katiyal – tried to ward off the two men but was overpowered.  According to news reports, Katiyal was later taken to the police station where IndiGo threatened to press charges against him.

The airline apologised to the passenger publicly on social media later. IndiGo president Aditya Ghosh said, “Whatever may have been the provocation, our staff were completely out of line and didn’t follow laid down procedures.”

We truly apologise to Mr. Rajiv Katiyal for this incident & assure him that the employee has been terminated. pic.twitter.com/9xZcSftgit

We condemn the actions of our staff & have taken stern action. We truly apologize for this. Such behavior is unacceptable – @AdityaGhosh6E pic.twitter.com/lGNT8An7rQ

He added that they planned to take strict action, calling the behaviour “unacceptable”.  He also said that the main perpetrator had been immediately sacked. It wasn’t clear who that person was.

IndiGo has also written to the ministry and apologized for the episode.

New rules have only recently been put in place in India to prevent troublesome passengers from flying from up to two years. They were implemented after a lawmaker assaulted an airline official.

Meanwhile, IndiGo has become the subject of several memes and the butt of jokes on the internet.  One of its competitors, Air India went ahead and joined in, taking subtle digs at the airline. For instance, in one of its ads, it promised passengers “unbeatable service”. It also chose to highlight the letters “beat” in blue (IndiGo’s theme colour).  The ads have now been deleted but Air India hasn’t distanced itself from the content.

This isn’t the first scary incident involving an airline and its treatment of passengers that has attracted attention from the public.  United Airlines received widespread criticism in April 2017 after a video was circulated online, showing a man being manhandled and dragged from a plane in Chicago after he refused to give away his seat.  The horrifying incident led to several op-eds and questions. The two parties eventually reached an amicable settlement.

Tagline of our diff airlines :

When you accidentally break the queue of IndiGo airlines pic.twitter.com/Odaa3iqFSw