It’s January again. It is the first month of the year as well as the first installment of the GST Voucher Utilities-Save (U-Save) rebate for the year 2019 to be given to about 90,000 HDB households in Singapore.

According to MOF, the amount expected for the U-Save rebate in 2019 will be around $300 million.

The U-Save rebate is one of the three rebate schemes, together with Cash, and Medisave rebates, introduced by the Singapore government since 2012, handled by the Ministry of Finance (MOF). It provides lower- and-middle-income HDB households with quarterly rebates to offset their utility bills. U-Save is paid in January, April, July, and October each year.

GST Voucher U-Save will be credited to one’s HDB flat’s utilities account, provided that the following conditions are fulfilled by the household:

Based on the type of flat the HDB household is occupying, each flat will receive only one GST Voucher − U-Save.

For this first tranche of 2019, HDB households will enjoy up to $100 depending on their HDB flat type. 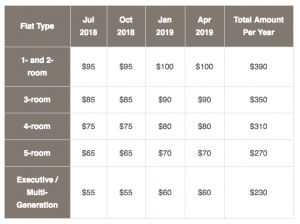 The ministry said that these vouchers are equivalent to about three to four months of their utility bills on average annually, which can sum up to $390.

Also, eligible households will receive an additional $20 per year from 2019 to 2021 in accordance with the passing of Budget 2018. This would be included in each quarterly payout.

For some netizens, the rebate is not really a piece of good news as they expressed their dissatisfaction. Some even argued that it is just the same with 2018.

Others commented that it is just a show for the upcoming elections.

There were also netizens who questioned on the basis of receiving the GST voucher, which is the residential address and not basing on the income.