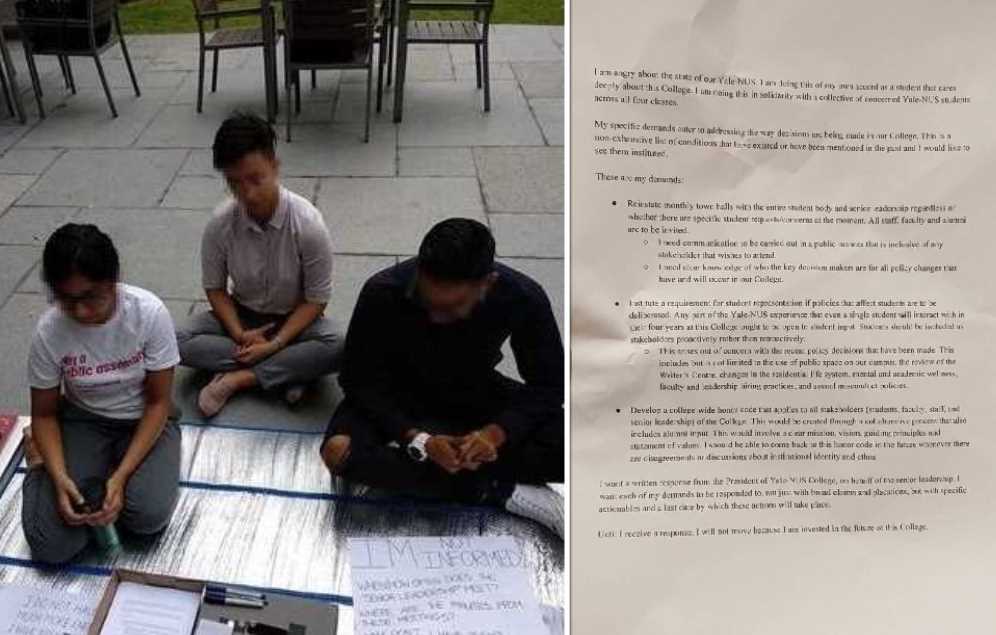 About 30 students gathered in a protest on school grounds, dissatisfied that the college has apparently disregarded the voices and opinions of students. In a joint open letter, these students explained that they were choosing to sit quietly in protest as they were tired of standing up and vocalising their thoughts since they felt that their voices were not being heard.

The students who were protesting added that they each tried to express their thoughts to the school’s management but that they feel that the management has not answered their questions sufficiently. To show their dissatisfaction, the students decided that at least one person will sit in protest until the management responds to their demands in writing.

Dissatisfaction over the way Yale-NUS apparently makes administrative decisions without consulting students has been brewing for some time.

Last year, an article titled ‘Yale-NUS’s Halcyon days are over!’ by two students ran in the student-run publication, The Octant. The article made headlines as the writers took issue with the college’s apparent disregard for student input.

Asserting that the lack of student consultation bred a “climate of apathy and fear”, the students decried unilateral decisions made by the school, including the Event Approval Committee that placed severe restrictions on the use of college space.

Policies like the Event Approval Committee, which prohibited any event that requires licences or permits under the Public Entertainments and Meetings Act or the Public Order Act, met harsh criticism from students who felt it was a “heavy-handed invocation of Singapore law”.

“I am angry about the state of our Yale-NUS”

More than a year later, frustrated students are calling on the college management to reinstate monthly town halls and to maintain continuous public communication with students when it comes to formulating policies that affect the student body and the Yale-NUS community.

Expressing their anger over the state of Yale-NUS, students have circulated a letter to the college management with a list of demands that need to be met:

Besides demanding that monthly town halls resume publicly, the letter calls on the school to involve the input of students proactively as opposed to retroactively. It also calls on the management to involve students more actively in decision-making and to implement an honour code that sets out the college’s mission, vision, guiding principles, and values ​​statement.

This code must be formulated with alumni input, according to students who are protesting, and will be a baseline that students will fall back on should disagreements about “institutional identity or ethos” arise between the management and alumni.

Yale-NUS responds through an open dialogue

Clarifying that the student body actively participates in the college’s decision-making, he added:

“Our education model is based on the idea of ​​free exchange, and we also attach great importance to diversity and diversity. The academic community includes students, staff and teachers. Dialogues are often held on different topics. These dialogues are also conducted in different ways, from large-scale meetings to small groups and even personal communication.”